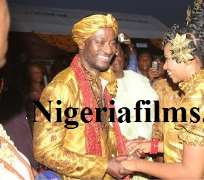 Talented Nollywood actress, Nse Ikpe-Etim performed a traditional wedding with her hubby on Thursday in her hometown, Ikot-Etobon in Akwa-Ibom State.

But what was conspicuous at the ceremony held at St Stephen Primary School playground was the absence of her Nollywood friends some of which graced Anne and Tu face's wedding in far away Dubai more than a forthnight ago.

Though the likes of Rita Dominic, Monalisa Chinda, Emem Isong and others were absent, Nse was very pleased at the success of the event.

Looking radiant in a carbon colour traditional attire and adorning an hairdo known with the Ibibios, the phone swap lead actress danced to the tunes of Waje's song as she approached her hubby with a cheeky smile for the exchange of vows to the admiration of her family and kinsmen.

Few of her friends who came from Lagos were songstress, Waje who is one of her closest pals, OAP Katherine Obiang, actor Bishop Umeh and a few other dignitaries.

It would be recalled that Nse Ikpe-Etim earlier got married secretly to her long time childhood friend, Clifford Sule, a UK-based lecturer on valentine's day February 14 at Ikoyi registry in Lagos.