Finally, All The Juicy Gist From 2face And Annie Idibia's Wedding 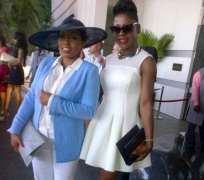 HHW reports all the juicy details from 2face and Annie's wedding. Read below:
Its official. By every standard and convention, 2Face & Annie Idibia are man and wife. The couple jetted out to Dubai last week for the final lap of their marriage rites and it was indeed a glorious event. Tons of Nigerian A-list celebrities stormed Dubai to celebrate with the couple. That was to be expected, it is 2Face afterall. HHW Magazine gives you all the juicy gist of everything that went down in Dubai…..

If you were in Dubai a day before 2face and Annie's wedding, you would be forgiven for thinking you were in Lagos. Tons of Nigerian residents in Dubai were present at 'Kiza Night Club' to have firsthand experience of all the performances they probably dont get to see often. Notable acts like eLDee, Sound Sultan, Don Jazzy, K9, Dr Sid, Davido, Tunde Ednut, And Sarz pumped up the Dubai crowd. Later on, 2face came on stage to thank all of his fans. Nollywood's Kate Henshaw, Ini Edo and Susan Peters also graced the occasion.

About the Jumeirah Beach Hotel

The Jumeriah Beach Hotel was the venue for 2face and Annie's wedding. The breathtaking hotel situated just by the beach definitely made a lasting impression on the minds of many.

As guests arrived dressed to the tee for the most talked about Nigerian celebrity wedding, they were treated to nice cocktails just before the wedding kicked off. A variety of alcoholic and non alcoholic drinks were served to guests.

Even if 2face decided to get married on the moon, it's certain non-invited guests will do anything to be in attendance, and this was clearly evident in Dubai. Some people gave out their invites to friends who don't have a personal relationship with the couple, while some Nigerian residents in Dubai decided to attended uninvited. Screening before entry was tight but trust Nigerians to always find a way around the toughest situations.

A white minister administered the wedding. He said he has been married for 47 years and is still learning. He spoke about love, forgiveness and understanding. He also asked the couple if they had come of their own accord.

No 'Speak or forever hold your Peace'

The wedding did not accommodate the opportunity for anyone to raise hands in disagreement or protest to the wedding. Friends suggested it was deliberate so that Pero or her agents would not disrupt the beautiful wedding.

You may kiss the bride

2face and Annie's speech- toast to my love

The lyricist 2face could not live up to Annie's standard and her toast was way more emotional and heartfelt and left some people in tears. Enjoy reading the well put together love letters from the bride and groom to each other HERE.

Banky W performs for the couple

As 2face arrived with his groomsmen that had notable faces like Sound Sultan, Timaya, Dotun (manager, 'Rumors' night club) and his best man Larry Gaga, they were welcomed by smooth singer Banky W's voice as he performed for everyone present.

And they lived happily ever after (Isabella's Banner)

As soon as the wedding was over, love child 5 year old Isabella Idibia led the couple out of the venue with a tag on her neck “And They Lived Happily Ever After“

After having a huge turnout of guests, things got even more interesting as it became the survival of the fittest to get on the ferry that conveyed everyone to the venue of the reception which was The Royal Beach Island. The boat cruise lasted for 45 minutes.

As guests arrived at the Royal Beach Island, they were quick to forget all the struggling they encountered trying to get on the ferry as the ambience at the venue of the reception reminded you of a fairy tale movie. Guests were treated to drinks of all kind before the arrival of the couple. There was enough to eat and drink as host Basketmouth cracked everyone up.
2face and Annie later cut their five layer wedding cake and thereafter hit the dance floor to dance as the latest couple in town.

The food and drink

Guests were obviously very hungry and could not wait to get started when Basket Mouth announced that they must wait until they were invited table by table to the buffet. Water, red wine and champagne was served.

He may be 2face's friend, but Ariyi Emami simply played the role of Godfather throughout the wedding. We gathered that he sponsored the island reception and that was just one of the many other things he paid for.

There was a special performance by Me5hack of 911 Entertainment; a track titled “Expressions of Love”. They also went further to distribute CDs containing the other songs specially dedicated to the couple.

P-Square should have been there to sing “Busy Body” for some celebrities who just hung around looking lost. Some of them were Jim Ikye, Ini Edo and Susan Peters to name a few.

A few guests who could dance and some who couldn't created a corner for themselves and even the couple took a break to come and watch. Davido took on a guy who seemed to be the best stepper of the night.

The Father and Daughter dance

It's tradition for the father to give out the hand of his daughter in marriage. Proud father Mr Macaulay danced with his daughter one last time as everyone watched in admiration.

Popular and evergreen song “African Queen” was played for the couple as they danced for a bit until 2face requested that DJ Jimmy Jatt changed the track to one more faced paced. They then danced to “Ihe Neme”.

Those who made it colorful

None of the former Plantashun Boiz were present in Dubai. Blackface says he wasn't invited. Read about that here, while Faze hasn't come out to say anything yet.

A-list celebrities D'banj, P-Square, Darey, M.I, Ice Prince were conspicuously absent in Dubai. Iyanya was in Uyo for the traditional wedding but couldn't make it to Dubai. We also expected to see Keke Ogungbe, D1 Adeneye, Tony Tetuila, OJB Jezreel if not for anything but for their previous relationships with 2Face. They've probably known him the longest.

Quite a number of people gave out their invites to friends who were overjoyed to attend even if they didn't know Annie and 2face personally. They made it worse by coming with other friends who were equally not invited.

The Idibia Garage gets another upgrade

After getting two brand new Prado Jeeps from the Governor of Akwa Ibom, HE Godswill Akpabio, the Idibias were again the recipient of another fancy automobile. This time, a brand new 2013 Corvette Sports Car. Check out photos of the ride HERE.