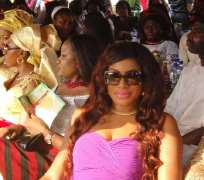 Many people who have earlier read about the controversy that brewed between the two actresses were shocked when they saw the Nollywood actress, Chika Ike in Eket where Annie had her superlative traditional marriage.

Chika Ike's attending Annie's wedding is a pointer to the fact that all is well between them. But contrary to what some close allies of Annie are saying, Nollywoodgists.com gathered that, Chika's presence at the wedding venue could mean two things, to clear the air on the story of their fisticuffs or there was no issue at all.

Sources said the beautiful thespian, Chika, came into Uyo on the 7th and on the 8th she went to Eket to support Annie.

Whatever that means, until we hear from the horses mouth, we can not really say the real position of things.