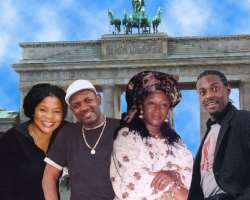 The Black History Month in Germany will be celebrated on a different scale in a variety of federal states. This year's celebration coincides with the 125th anniversary of the Berlin Conference (also known as the Kongokonferenz or “Congo Conference”) that greatly influenced the faith of continental Africa and the Diaspora. The proposed program will also be part of the 2010 FIFA World Cup Games in Africa. Therefore, this program has rallied numerous organisations and individuals, both from the Diaspora and the German community. Alongside coordinating and organising a platform that will allow and encourage people to learn about, pay tribute to, and celebrate the contributions of the African Diaspora Community throughout the world, the African Union African Diasporas 6th region organisation in Germany (with the mandate of the African Union), seeks to encourage organisations from the African Diaspora to develop all year programs that identify the strength, weaknesses and opportunities of the Diaspora as well as to develop the necessary capacities to enable them to be fully integrated in German society.

Black History Month also entertains and allows you to experience the influences of the African Diaspora through music and the arts. A diverse selection of music, performance art, and visual art will offer the public a more lively and entertaining celebration.

For the first time since the existence of Black History Month - 1926, Nollywood movie titled; “Love In Berlin …the meeting point” was chosen by the organizers to be screen during the festival. A dream comes true for both the producer of the film in particular and Nollywood industry in general. By chance, film critic's journalist of the Nigeria Guardian Newspaper, Mr Shaibu Husseini had a chat with the lucky awards winner producer of the film, Mr. Isaac Izoya. Below is the Exclusive interview.

1. Congrats, why a love story for a day that people recollect the emancipation story?

Call it emancipation or liberation, the key word that holds it all together is love. Without love, there will be no global integration, no inter-cultural marriages between blacks and white. Love is the major force in fighting racism and hatred, and that is what “Love In Berlin…the meeting point” shot exclusively in Berlin for that matter is about. If you remember Berlin conference of 125 years ago (also known as the Kongokonferenz or “Congo Conference”) that greatly influenced the fate of continental Africa and the Diaspora, you will understand why the Americans, the organizers of this year Black History Month, among them, Directors, choose to screen “Love In Berlin …the meeting point” rather than showing their own movie.

2. If I'm not mistaken, this is the second premiere of the film? Why is it having a second time around?

That is what we mean by a good movie with a meaningful story line. A good or meaningful movie or music never fades. Look back to your youthful days there must be one or two movies you will always like to watch from time to time again and again irrespective of the year it was produced. The first premiere of the film was more or less local, that is within the Africans in the Diaspora, but now, it's going to be more international.

3. Are you flying any of the cast members to Berlin for this showing as you normally do?

Excluding Patience Ozokwor, Jim Iyke and Lancelot Oduwa Imasuen, the other cast in the movie are based here in Germany and we don't need the home base stars for this event though Jim Iyke coincidentally, will be around at the same time, which may add colour to the event. Let me make it clear that he's not invited primarily for this event.

4. How come you have not released the film in Nigeria, years after it was produced?

“Love In Berlin…the meeting point” has been in circulation since October 2009 in Nigeria courtesy of Sam Civic marketer. The delay in the release paid off because we're always trying to be outstanding in our productions. After editing in Lagos, we came back to an international studio in Germany for colour and sound corrections to upgrade the quality to world standard and the result is there to speak for us.

5. So after this project, what next for Ehizoya Entertainment?

I will be featuring in a Hollywood movie titled; "Unknown White Male", with Liam Neeson and Diane Kruger playing lead roles from 9 February 2010. We'll also complete the second part of Olu Maintain aka Yahoozee Europe tour which will take us across Germany, Switzerland, Holland, Belgium, France and Italy from 20 February 2010. There is also an attractive huge project to rebrand Nigeria as part of the 50th Independence Anniversary of Nigeria across Europe starting within September and October.2010. Busy days ahead of us.

6. There has been a lull in your hosting tours featuring top Nigerian celebrities. Has it anything to do with the recession or has Ehizoya exhausted all the celebrities?

Haahaaaha! “The Show Must Go On!” whether the devil likes it or not, recession or not. Within the last six months, we organized two Europe tours for major celebrities. Among them were Mr & Mrs Palmer Omoruyi, Benin popular musicians, and Olu Maintain aka Yahoozee. Nigeria A-list Hip Hop star. In fact, we are waxing stronger than ever before but changing the focus from Nollywood stars to musicians. Who's Who in Nollywood have been on our tour and the old legend in the industry can't withstand the stress of our tour, jumping from flight to flight and from train to train. For the young ones, it could be fun.

7. So tell us your expectation from this showing and where and when is it going to happen

It's a dream come true for me. It means acceptance of Nollywood movie at a high level. Congratulatory messages from European film makers like Dorothee Wrenner of Berlinale Berlin and Mary Cass from Rome, Italy, among others, have been pouring in. We may not have what America has to produce a movie but our story lines remain outstanding and acceptable to all. In my personal opinion, that is the more reason why the Nigerian government and the stake-holders must do everything to save Nollywood against piracy through the Internet.

Thanks and God bless.