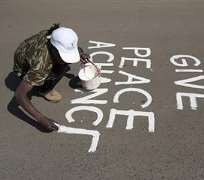 Strongholds of defeated presidential candidate Raila Odinga were peaceful on Sunday, apparently reflecting a desire by Kenyans to avoid a repeat of the bloodshed that followed the last election five years ago.

Odinga has refused to concede the election to rival Uhuru Kenyatta, but said he would challenge the result in the courts and urged his supporters to refrain from the violence that convulsed Kenya when he lost the disputed vote of 2007.

A smooth handover of power this time around is seen as critical to restoring Kenya's reputation as a stable democracy and safe investment destination - an image that was shattered by the mayhem that followed the last election.

In Kisumu, the biggest city in Odinga's tribal heartland, business owners on Sunday made plans for a full resumption of trading after many had run down their stocks in the run-up to the vote because of fears of unrest and looting.

Nestled on the shores of Lake Victoria in the west of Kenya, Kisumu was a flashpoint in the post-election violence five years ago that left more than 1,200 people dead, hundreds of thousands uprooted from their homes and properties destroyed.

From Lake Victoria's lush banks to Kenya's Indian Ocean coastline, Kenyans from across the political divide said lessons had been learned in a country where political support tends to derive from ethnic identity rather than ideology.

"The Kenyan people have grown up and realized that politics is just politics," said IT worker Timothy Kamau in the port city of Mombasa. "We just want to get on with things."

Kenyatta avoided a run-off vote by a razor-thin margin, just edging above the 50 percent-mark, meaning he won outright. The tiny margin was enough to raise concerns that Odinga supporters could take to the streets, even though Kenyatta was more than 800,000 votes ahead of his rival.

Western nations now face a diplomatic dilemma about how to deal with a president who is indicted for crimes against humanity, but will be relieved by a calm vote in a nation they view as vital to regional stability and an ally in the fight against militant Islam in the Horn of Africa.

TRUST
Television channels filled the airwaves with music videos and gospel prayer, signs of a regular Sunday morning and signaling that the nation wants a swift return to normal after the back-to-back election coverage and appeals by presenters for Kenyans to accept the outcome calmly.

Odinga said that the election was "tainted", an echo of his claims that the 2007 vote he lost to the now-outgoing president, Mwai Kibaki, was stolen. But he also said he would fight it in the courts, not on the streets.

Five years ago Odinga called for peaceful mass action from supporters because he did not trust the courts to be fair. But a new constitution was a cornerstone of a deal brokered by former U.N. chief Kofi Annan to end the 2007/08 post-election violence and has built public confidence in the courts.

Odinga said on Saturday his CORD alliance and most Kenyans had faith in a reformed judiciary and he would accept the Supreme Court's ruling on his petition. His comments quickly defused tensions in Kisumu and elsewhere.

"We believe in our leader Raila Odinga and now that he has instructed us to remain calm, we will honour him. We will wait for a court verdict, we trust our reformed judiciary," shopkeeper Nick Ogolla said shortly after Odinga's statement.