Freedom of information laws struggle to take hold in Africa 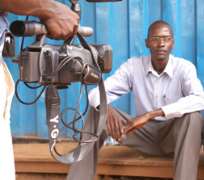 In Uganda, a ruling this week in a landmark case of two journalists seeking to compel their government's disclosure of multinationals oil deals highlighted the challenges to public transparency just before media leaders, press freedom advocates, officials, and former U.S. President Jimmy Carter gather in Ghana next week at the African Regional Conference on the Right of Access to Information.

Senior reporter Angelo Izama and Charles Mwanguhya Mpagi of Uganda's leading independent newspaper Monitor filed the case to appeal the refusal of Uganda's attorney general to provide them with certified copies of oil exploitation agreements—because of alleged confidentiality clauses in the documents—according to news reports. The journalists argued that the information was of public interest: Ugandans must be able to hold the government and its partners accountable for the exploitation of the oil.

However, Chief Magistrate Deo Ssejjemba said in his ruling that the petitioners had not proved either of the public benefit of disclosing the information to the public, according to news reports. The journalists, along with their partners the Open Society Institute's East Africa Initiative and Human Rights Network Uganda (HURINET), said they were considering appealing the ruling.

The case was originally filed by lawyer and Member of Parliament Abdu Katuntu under Uganda's Access to Information Act, a legislation he introduced in 2005. Patrick Tumwine of HURINET told CPJ a local coalition of civil society organizations has been raising awareness about the law. More than 50 percent of Ugandans requesting information about resources allocations, local government affairs, or cases with security agencies get turned down, he said.

Freedom to information is enshrined as a fundamental human right by the United Nations, and upheld by the African Charter on Human and People's Rights. The Declaration of Principles on Freedom of Expression in Africa explicitly states: “Public bodies hold information not for themselves but as custodians of the public good and everyone has a right to access this information, subject only to clearly defined rules established by law.” However, to this date, only five countries in sub-Saharan Africa (Uganda, Ethiopia, Zimbabwe, South Africa, and Angola) have passed freedom of information legislation, according to Mukelani Dimba, the deputy chief executive officer of the South Africa-based Open Democracy Advice Centre and an expert on the topic.

Progress in the enactment of such legislation remains sluggish, even stalled for a dozen countries that have crafted draft bills. In Mozambique for instance, parliament has yet to table a draft bill presented by a platform of civil society organizations since November 2005, Alfredo Libombo, who heads the Mozambican branch of the Media Institute of Southern Africa told CPJ. The same is true in Kenya, Sierra Leone, and Tanzania, according to Dimba, while legislative chambers in Ghana, Liberia, Nigeria, Rwanda, Sudan, and Zambia have struggled to push through tabled draft bills.

Even the handful of countries with legislation in place have mightily struggled to translate their laws into meaningful reality. For instance, Zimbabwe's deceptively named Access to Information and Protection of Privacy Act has almost invariably been used to censor the press.

Dimba said he was aware of only two cases where the law was used for freedom of information purposes. Ethiopia passed its legislation—within a package of laws effectively criminalizing independent journalism—but has a long way to go towards a culture of transparency and openness. Ethiopian editor Dawit Kebede told CPJ, there had been some improvements with the establishment of a Government Communications Office. However, fear of government reprisals has led many designated communications officers at public agencies to decline to comment without the consent of their superiors, he explained. Even South Africa, recognized as a model of implementation, has struggled to make the progressive ideals of its legislation a reality, according to Dimba. “Only 40 percent of requests for information in SA are processed and attended to in terms of the law,” he said. “The rest are simply ignored.”

All these issues will surely be discussed by the “more than 125 persons from 40 countries” expected during the Feb 7-9 conference, organized by the Carter Center in the Ghanaian capital, Accra, where, just last month, hundreds of journalists and activists organized a protest march in response to parliament's delay in passing “Right to Information” legislation.