Texting your way to health 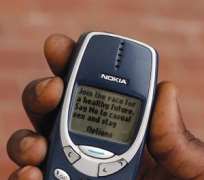 By Jocelyne Sambira
message telling you when and how to take your diabetes medication. Or a voice mail reminding you of your next mammogram. That's what two UN agencies are hoping to do with mobile technology to save lives, reduce illness and disability and bring down healthcare costs.

Increased access to communications technologies has given rise to the concept of “mobile health,” or mHealth, involving the use of mobile phones for healthcare purposes. The World Health Organization (WHO) and the International Telecommunication Union (ITU) are currently testing mobile solutions to help people with non-communicable diseases (NCDs) like diabetes, cardiovascular maladies, respiratory diseases and cancer to better manage their conditions. The agencies also hope to encourage people to quit smoking, exercise more and eat healthier.

An estimated 36 million people die every year from NCDs in both developed and developing countries alike, according to WHO. They also account for a major share of health care needs and expenditures. In the next decade deaths from NCDs in Africa will jump by 24 per cent, the agency forecasts.

ITU Secretary-General Hamadoun Touré believes that these diseases can be controlled through the intervention of mHealth initiatives. “Technological innovations are changing the landscape of disease prevention and control,” he said. “The widespread availability of mobile technology, including in many of the least developed countries, is an exceptional opportunity to expand the use of e-health” (which includes computer, Web, mobile phone and other electronic technologies). He was speaking in Dubai at Telecom World 2012, a yearly event at which experts, policy makers and leaders come together to share ideas on the future of global telecommunications.

The initiative builds on current projects like WHO's use of mobile devices to gather data on tobacco use in 17 countries, covering half the world's population. Mobile phones have also been shown to help health care providers offer better care and deter harmful practices. In Kenya, according to a recent study, government health care workers were sent text messages coaching them on the proper malaria-treatment protocol. Health clinic workers can send alerts when they run low on medications to avoid stock shortages.

By early 2012, says ITU, there were more than 6 billion mobile phone subscriptions worldwide, with developing countries accounting for the lion's share of growth. In that context, mHealth could be one of the best ways to reach huge numbers of patients and care providers.

However, warns Harsha Thirumurthy, an economist whose research focuses on the link between health and economic outcomes in low-income settings, several aspects of the mHealth interventions warrant further research. In the Bulletin of the World Health Organization, he and Richard T. Lester strongly recommend a more thorough investigation of how text-messaging interventions compare with other interventions such as feeding programmes or home visits by community workers. They also bring up issues of cost — who will foot the bill remains unclear. If not the health care providers, are patients willing to pay for the service? Furthermore, it remains to be seen if mHealth can help induce behavioural change and get people to better adhere to treatment regimens for diseases like malaria and tuberculosis.