Why Pastor Okotie Ban This Journalist From Attending His Church 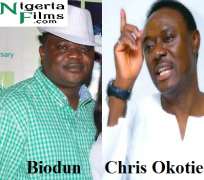 Biodun Kupoluyi, the publisher of E24/7 Magazine said the senior pastor of Household of God, Chris Okotie, has barred him from attending his church after he wrote a story alleging that Rev Okotie is dating an undergraduate named Miss Naomi Hoffman. Biodun is a 'controversial' member of Pastor Okotie's Household of God.

See what Biodun said about his encounter with Pastor Okotie below:

I received the news from a man claiming he's representing the church that he has been directed by the pastor of the church and members of Household of God church that I should not come and worship with them. His reason, he said, was premised on E24-7 magazine's expose - 'Pastor Chris finds new love... says I will not get married again, but may opt for surrogacy soon.'

I found it shocking that a day after the publication hit the streets, his media department sent a release out and it confirmed our story.

He actually made those statements and we reported it. I think he did not think anybody could have known about his romance with the girl, Naomi. He was caught off guard...but as a journalist, I owe our teeming readers that responsibility.

I feel fulfilled, though I will miss his theatrics, his stage performances and verbosity."

Is he right to report 'negative' stuffs about a church where he worships?

Why I sent My wife Packing' – Rev Chris Okotie