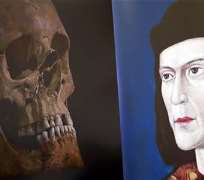 A skeleton with a cleaved skull and a curved spine entombed under a car park is that of Richard III, scientific tests confirmed, solving a 500-year-old mystery about the final resting place of the last English king to die in battle.

Richard, depicted by William Shakespeare as a monstrous tyrant who murdered two princes in the Tower of London, was killed fighting his eventual successor Henry Tudor at the Battle of Bosworth Field in central England in 1485.

In one of the most significant archaeological discoveries of recent times, a team from the University of Leicester said evidence showed that a skeleton found last year during excavations of a mediaeval friary under a parking lot in the city was indeed that of Richard.

After a detailed academic presentation focusing on the life, wounds and physique of Richard III, the lead archaeologist on the project, Richard Buckley, announced his conclusion to cheers and applause.

"It's the academic conclusion of the University of Leicester that beyond reasonable doubt the individual exhumed at Grey Friars in September 2012 is indeed Richard III, the last Plantagenet king of England," Buckley said.

Academics said DNA taken from the body matched that of Michael Ibsen, a Canadian-born furniture maker in London who genealogists said was the direct descendant of Richard's sister, Anne of York.

The skeleton showed signs of injuries consistent with wounds received in battle; a bladed implement appeared to have cleaved part of the rear of the skull while a barbed metal arrowhead was found between vertebrae of the skeleton's upper back.

While the findings may solve one riddle about Richard, the last Plantagenet king of England remains a complex figure whose life, made famous by Shakespeare's history play, deeply divides opinion among historians in Britain and abroad.