French President In Mali To Back French Troops, Visits Timbuktu 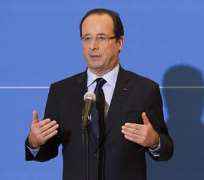 French President Francois Hollande flew to Mali on Saturday to support French troops fighting Islamist rebels in the Sahel nation, and he visited the famed ancient city of Timbuktu that was recaptured from al Qaeda-allied fighters six days ago.

Hollande, accompanied by his ministers for defense, foreign affairs and development, was greeted by a group of dancers and singers at Timbuktu airport and then went on to visit the Grand Mosque in the UNESCO World Heritage Site city.

"I'm so proud of Francois Hollande, we have got our old lives back," Khalifa Cisse, the muzzein or crier who calls the faithful to daily prayer at the mosque, told Reuters, wearing a flowing white robe and cap and a red, white and blue scarf.

The international community has greeted the liberation of Timbuktu with relief as the sharia-observing radical Islamist occupiers had smashed traditional ancient Sufi mausoleums in this seat of Islamic learning, calling them idolatrous.

They had also destroyed up to 2,000 of some 300,000 priceless ancient manuscripts held in the city. Curators say the bulk of the scholarly texts are however secure and safe.

During his one-day visit to Mali, which will also take him to the southern capital Bamako, Hollande was expected to outline the next steps of the French military operation, which has so far retaken from the rebels the main towns of the north.

Hollande has said that the French operation, which has 3,500 soldiers on Malian soil backed by warplanes, helicopters and armored vehicles, wants to hand over to a larger U.N.-backed African force which is still being deployed.

Sustained French airstrikes have forced fighters from the Islamist militant alliance that was occupying northern Mali to retreat into the remote Adrar des Ifoghas mountains near the Algerian border. The rebels are also believed to be holding there seven French hostages previously seized in the Sahel.

The United States and Europe are backing the U.N.-mandated Mali operation as a counterstrike against the threat of radical Islamist jihadists using the inhospitable and ungoverned Malian Saharan north as a launch pad for international attacks.

The U.S. and European governments are providing training, logistical and intelligence support to the French-led operation in Mali, but have ruled out sending ground troops.