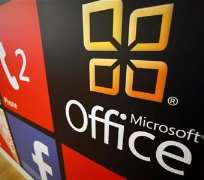 Microsoft Corp launched its new Office software on Tuesday, featuring constantly updated, online access to documents from a range of devices as the world's largest software company attempts to tailor its most profitable product to a mobile generation.

"The notion of an always up-to-date streaming version of Office comes directly from how people are using devices today," said Kurt DelBene, head of Microsoft's Office unit, in a phone interview. "You really want all your content to roam with you. We see that as an opportunity to deliver what customers are asking for."

The consumer-focused version of the new software, called Office 365 Home Premium, launched on Tuesday. After downloading the basic programs online, users can access the latest versions of all Office applications from up to five devices on a subscription basis for $100 a year.

The software will be updated online, marking a change from the past where users had to wait years for upgrades to installed software.

The 'ribbons' showing commands in Word and Excel are mostly unchanged. For the first time the package includes online calling and video service Skype, which Microsoft bought in 2011.

Users' work can be stored in remote data centers - known as 'the cloud' - and the latest version of a document accessed from any licensed device with a browser that the user wants to work on.

GOOGLE KILLER
Two and a half years in the making, the new Office is designed to counter the growing popularity of Google Apps, a collection of online-only, Office-style applications Google provides free for home users and sells to businesses for $50 per user per year.

Microsoft is hoping its move into online services, alongside its new Surface tablets, pushes it back into the forefront of mobile computing, which has been led by Google's Android software and Apple's combination of slick hardware and apps.

"Today's launch of Office 365 Home Premium marks the next big step in Microsoft's transformation to a devices and services business," said Steve Ballmer, Microsoft chief executive, in a statement.

The new Office will run natively on Microsoft's own Surface tablets - both the 'RT' and Pro versions running on ARM Holdings and Intel Corp chips respectively - but it will not run natively on Apple's iPad, disappointing some iPad users who are also Office fans.

"We have not said that we will do rich client software on the iPad at this point," said DelBene, although he did not rule out producing such software in the future. "We've been very logical in our approach. I'm pleased with the software we have delivered for the iPad to date," he said.

Microsoft's SkyDrive online storage system and its OneNote note-taking software are available as iPad apps and iPad users can use limited Web versions of some Office applications.

The iPad issue has been a long-time quandary for Microsoft, which might gain more mobile users by making Office available on the iPad, but also removes a major incentive to buying its own competing Surface tablet.

The rollout of Office 365 for corporations, Microsoft's core market, has already started, but the new product will not be officially launched until February 27. The new Office applications have been available to large volume business customers since December.

Microsoft estimates that 1 billion people worldwide use some part of Office and the unit that produces Office is Microsoft's most profitable, edging out the flagship Windows division for the last few years. It now accounts for more than half of Microsoft's overall profit.

Sales dipped last quarter as consumers held off in anticipation of the new Office, but analysts expects sales to ramp up again this quarter.

"Microsoft has been criticized not only for pricing, but also for not innovating Office quickly and being slow to respond to the move to the Web or to mobile," said Michael Silver, an analyst at tech research firm Gartner. "Office 2013 addresses some of the criticisms, but Microsoft still has the power to maintain its pricing levels."