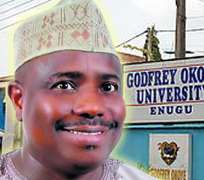 ABUJA, January 28, (THEWILL) – In recognition of his sterling leadership qualities and efforts at promoting inter-religious harmony in the country, Godfrey Okoye University, owned by the Enugu Diocese of the Catholic Church, has named an auditorium after the Speaker of the House of Representatives, Hon Aminu Waziri Tambuwal.

The decision to build and name the school auditorium after Tambuwal was made known last weekend by the Vice Chancellor of the University, Reverend Father (Professor) Christian Anieke, during the institution's Capital Project Campaign held at the University's temporary campus in Enugu.

A statement by the Speaker's Special Adviser on Media and Public Affairs, Malam Imam Imam, quoted Tambuwal as commending the institution for the gesture, saying it would spur him to do more for the upliftment of the standard of education in the country.

Speaking at the event, Tambuwal described as worrisome, the glaring absence of academic activities in majority of Nigeria's institutions of learning.

He said the country's education sector was facing imminent collapse, adding that all hands must be on deck to salvage the situation.

He however assured of the resolve of the House of Representatives to continue to come up with legislative interventions that would guarantee educational excellence in Nigerian schools.

He said in line with the House's Legislative Agenda, the lawmakers were working to ensure that all Nigerian children get better and qualitative education for the betterment of the society.

Tambuwal equally commended the Enugu Diocese of the Catholic Church for establishing the university and urged other dioceses and religious bodies to emulate the initiative by setting up schools that would help raise better trained and morally upright people in the society.

On his part, the Vice Chancellor of the University, Reverend Father Anieke, said the overall interest of the church in education was what inspired the Enugu Diocese to establish the University.

He said the presence of Tambuwal at the Capital Project Campaign launch underscored his commitment to education and strengthening of inter-religious harmony in the country.