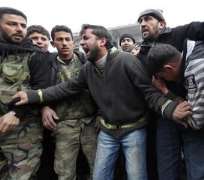 Government forces killed at least 36 people, 14 of them children, in a bombardment of rebel-held areas on the outskirts of Damascus on Sunday, Syrian opposition activists said.

Video footage showed women weeping over the dismembered bodies of children strewn across a field in the Eastern Ghouta region, near an air defense base on the edge of the town of Muleiha, 5 km (3 miles) east of Damascus.

The air, rocket and artillery campaign is the heaviest since rebels overran a helicopter base and missile base near Damascus two months ago and encroached on the main international airport, inching steadily closer to the capital, the sources said.

Separately, in the northern opposition-held town of Azaz, 10 km (6 miles) from the border with Turkey, a Reuters reporter saw a Syrian warplane bombard a rebel position in the main market. Opposition activists said 16 rebels or civilians were killed.

Russia urged the rebels to make counter-proposals to those made by President Bashar al-Assad in a speech a week ago to start a dialogue that could end the fighting.

"If I were in the opposition's shoes, I would come up with my ideas in response on how to establish a dialogue," Russian Foreign Minister Sergei Lavrov said on Sunday.

"President Assad came out with initiatives aimed at inviting all opposition members to dialogue. Yes, these initiatives probably do not go far enough. Probably they will not seem serious to some, but they are proposals," Interfax news agency quoted Lavrov as saying.

Muleiha's air base is the last major fortification in the area east of Damascus not yet to have fallen to the rebels. Assad's core troops and security personnel, mostly belonging to his minority Alawite sect, are entrenched in the capital.

"MAD BOMBARDMENT"
"God is greater than you, Bashar," one activist says in the video as a youth carries the torso of a child. At least three of the dead were women, opposition sources said.

The footage was taken by activists and could not be independently verified.

Activist Yasmine al-Shami, speaking by phone from Damascus, said residential areas around Muleiha and in the working-class suburbs of Hazzeh, Kfar Batna and Douma were being heavily hit.

"The regime has gone mad with bombardment today. Footage that has been coming in is heartbreaking. Among the dead is a mother, Heba al-Lahham, and her three children, who were playing in a field in Hazzeh," she said.

A report by the opposition Damascus Media Centre said rebels had been attacking the Muleiha base with rocket-propelled grenades and mortars for five days, and the army had fired over 600 rockets at the town in response.

"The base has a large numbers of tanks and armor and stockpiles of ammunition. There is information that the Free Syrian Army has destroyed five tanks and one armored vehicle," the report said.

A commander in Liwa al-Islam, one of several rebel brigades fighting in the area, said the compound was well defended.

"Our objective is to take it, but it will not be immediate," he said.

The rebel accounts could not be independently confirmed and there were no state media reports of the fighting on Sunday.

Government troops have been relying on air power and artillery and rockets stationed on Qasioun Mountain in Damascus and nearby bases to keep in check rebels who have taken over a series of Sunni Muslim suburbs around the city.

Rebels have been building supply lines in Eastern Ghouta for months but still lack the numbers and heavy weapons to storm Damascus, where 70,000 mostly Alawite troops are estimated to be based.

SPEECH DISMISSED
Assad's speech a week ago was greeted with disappointment by U.N. Secretary-General Ban Ki-moon and international mediator Lakhdar Brahimi, while the United States dismissed it. Syrian rebels described the speech as a renewed declaration of war.

But Russia, which has shielded Damascus from more international pressure to end the bloodshed, said Assad's ideas should be taken into account.

State-run Itar-Tass quoted Lavrov as saying that rebel demands that Assad must leave power before any talks can happen "make it impossible to begin a dialogue".

"If one makes the removal of the Syrian president a condition, the price of that approach is more and more victims, and those who support that approach must bear the responsibility," he said.

It was the first visit to Jordan by Alkhatib, a prominent cleric from Damascus, to Jordan since he was appointed head of the SNC last month. Jordan has been keeping its distance from the Islamist-controlled Coalition.

A source in the SNC delegation said the men had discussed improving the conditions of more than 30,000 Syrian refugees in the Zaatari camp, where discontent has been rising with the restrictions on movement imposed by Jordanian authorities as well as with the level of humanitarian care.