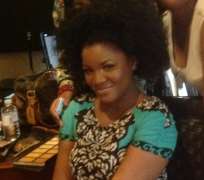 Nollywood heavyweight, Omotola Jalade Ekeinde has done it again. Not many beautiful thespians can take the bold step of changing their looks but sexy Omotola mostly fondly called Omosexy by her fans, recently put on an afro-hairdo.

Omotola, who is presently out of the country, posted the above picture on her twitter page last night and her teeming fans have already been pouring out their love for her over the picture one of her fans described as 'sexylicious'.

Omotola is one of Africa's export in the movie world. She has won many awards in heer career that has spanned over a decade. She is one of the best paid actresses in the industry who also commands lots of respect.