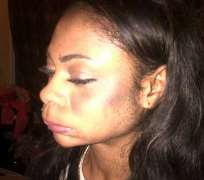 Karen tweeted, "Wow, I got slapped at a smirnof party, by a security. He loaded his gun and put it to my face at the car park, he wanted money and I didn't have any on me then he slapped me. Still in shock and pain."

Karen further said in her tweets, "I know I have a good heart but I won't let this go with out fighting for justice cos he might do it to someone else."