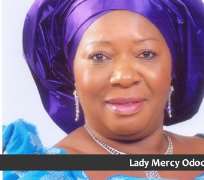 Commissioning the bungalow, Lady Orji stated that by the completion of the bungalow, her office has so far built and equipped six houses for indigent widows and a blind man and woman as part of her complimentary governance role of providing succor to this class of people who have no one to help have a decent accommodation.

She restated the commitment of Gov. T. A. Orji's administration of enhancing the welfare of not only the indigent widows but also to all vulnerable groups in the society and other Abians to feel the impact of the government and empowered them to contribute meaningfully to the socio-economic development of the state and appealed to well endowed Abia to assist the government in ameliorating the plight of all indigent widows and other vulnerable groups in our society.

Lady Orji expressed the hope that by the inauguration, the bungalow fully furnished with all household properties and a borehole which will provide another stream of income for the family, the Alozie's with six children now have a comfortable and convenient apartment would breath a new lease of life, have succor and fulfillment of being house owner and have her days on earth lengthened.

While expressing optimism that the hope would help sustain the family by providing them with another source of income for the family, the wife of the governor cautioned their kinsmen and the community against any forms of abuse, molestation and oppression of the or any attempt to kill or poison widow and her children but should rather assist them in any way devoid of any devilish intent to overcome whatever challenges they might face.

She further appealed to the youths in the area to avoid any forms of unwholesome vices capable of undermining their future, peace and development of the state stating that if not for the prevailing peace in the area once noted for the spate of kidnapping, the completion of the house project would not have been actualized and assured them the that the state government would continue to provide empowerment opportunities for the youths to be meaningfully productive.

The wife of the governor said that the state government has done a lot in the delivery of democracy dividends to the people and that the peaceful state of Abia, being free from all forms of kidnapping and violent crimes stemmed from the high investment in area of security in order to attract investment and give our people the conducive atmosphere to engage in economic activities that would impact positively on their lives.

Earlier, the out-going Transition Committee Deputy Chairman of the council, Mrs Ijeoma Ngozi extolled the great qualities of the wife of the governor in providing succor to widows, indigent women and other vulnerable groups in the state stating that lady Orji has done so much in providing new lease of life to this classes of people.

Mrs. Ngozi also stated that the struggle for women political empowerment and recognition would not have achieved much success if not for the wife governor's efforts that through her instrumentalities have seen the increase in the number of women in appointive and elective positions and urged her not to relent.

She recalled the prompt attention Her Excellency gave her she brought the plight of Mrs Alozie to her knowledge of the dilapidated nature of their house and how trees destroyed their house and killed her husband and commended her for her spirit of philanthropy and human milk of kindness stating that Abia women had never had it so good in the hand of wife of the governor who cared so much for them like Lady Odochi Orji has done.

In her words of appreciation, Mrs Alozie thanked the wife of the governor for the new lease of life and for bringing them out of destitute and homelessness and in providing a comfortable apartment she and her children will lived in and pray to God to continue to protect and uphold her with His right hand of glory.