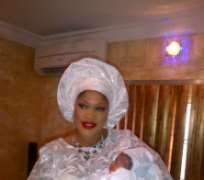 Nollywood actresses, Bisi Ibidapo Obe and Mosun Filani, both who gave birth last week, have christened their babies in a separate ceremony held at their respective homes.

For Mosun, she staged her child's christening at her husband's Tajudeen Olanrewaju Estate home yesterday. She named her daughter 'Oluwashemilore Oduoye. The event was witnessed by friends and family members of the couple with few colleagues in attendance.

Bisi held her child's christening at her Magodo, Lagos home with clerics from her white garment church; the Celestial Church Of Christ, around to make sure the ceremony took place as planned. The sexy actress, who reportedly accused a former federal legislator, Dino Melaye, of impregnating her, named her daughter 'Oluwajomiloju Abikeade'.

The ceremony is being attended by her close pals and family members. A big party is being held as at press time at a nearby hall in Magodo.