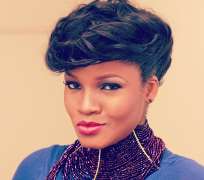 Omotola has won another award again in 2012 after the previous awards she has been decorated with in the year. On Sunday, November 25, 2012, the talented screen diva added another feather to her cap at the Exquisite Lady of the Year (ELOY) Awards held in Lagos.

The mother of four and wife of a brilliant pilot, Captain Mathew Ekeinde, was announced ELOY Awards actress of the year beating the likes of Ini Edo, Funke Akindele, and Nse Ikpe-Etim to
win the award. Omotola got the award for her role in film 'Ties That Bind.'

Meanwhile, momentum is heating as Omosexy, as her fans call her, who doubles as the president and queen of Oxynation and Oxygenation, which are her own group of nation and community, is doing everything possible to make the debut of her reality show series, 'Omotola: The Real Me' a success.

The show will premiere on December 6, 2012 on AfricaMagic Entertainment channel.