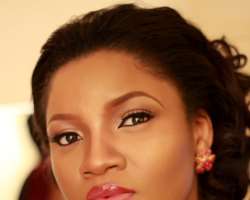 The year 2012 will be one in which the duo of Omotola Jalade-Ekeinde and film maker Obi Emelonye won't forget in a hurry as the duo grabbed the headlines in spectacular fashion judging by the quality of the kind of jobs they both did.

The movie, Last Flight to Abuja produced and directed by award winning Obi Emelonye first grabbed the headlines when it reportedly sold more than 8million in its first week at the cinema!

Omotola's popularity and box-office credibility was put to test when the movie, opened at the cinema. The premiere till date remains the biggest premiere of any movie with six packed halls, a record no premiere has beaten. Last Flight to Abuja also starred Hakeem Kae Kazeem, Jim Iyke, Jide Kosoko and others.

Last Flight to Abuja is still showing at the cinema and it has already grossed 24 million, thereby making it the highest box office earner this year! No other movie has come close to this record so far.

It would be recalled that the same movie director produced Mirror Boy a movie that made 18 million at the cinema..

The year 2012 has been incredible for super star, Omotola Jalade Ekeinde; from being the highest paid actress to being the busiest on locations of big budget movies, now famously called "the new Nollywood" Omosexy has had a full calendar and bag as well.

It will be recalled that the sexy superstar starred in the acclaimed Ties That Bind alongside Hollywood's Kimberley Elise, Kofi Adjorlolo, ama K, Khareemar Aguiar among others..

Still in 2012 Omosexy as she's fondly called played the leading role in the High budget Tarila Thompson's movie ,"Up Creek "still in post production. She was also on call for Teco Benson's film "Blood on the Lagoon" also in post production.

The multiple award winner thereafter went on to star in the movie AMINA alongside British actor Wil Johnson and Vincent Regan , a movie written, produced and directed by Christian Ashaiku, where she plays the character of a woman suffering from mental disorder. The movie recently premiered at the prestigious Empire Leicester square London to great reviews.

As icing on the cake the actress was recently Honored As the First ever African BEFFTA Film Icon for her contribution to the film industry in Africa, Europe and globally. BEFFTA (Black Entertainment Film Fashion Television and Arts) award is Europe's biggest award ceremony celebrating achievements of black and ethnic personalities in showbiz globally.

Omotola is a United Nation World Food Programme Ambassador and Amnesty International Activist. The talented actress is a role model who gives back to the youths through her own charity, Omotola Youth Empowerment Programme (OYEP).