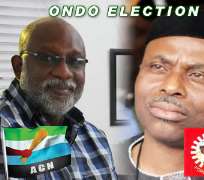 SAN FRANCISCO, October 20, (THEWILL) – Accreditation of voters for Saturday’s governorship election in Ondo State begun amid tight security. A good turnout of voters was observed while voting materials arrived at the various polling centres on time.

Voting will not hold in two polling units where registration of voters did not take place. This brings the total number of polling units in the state to 3, 009.

All the accredited voters began casting their votes for their choice candidate immediately the official of the state electoral commission called for the commencement of the exercise.

The three frontline candidates, and indeed other contestants from whom the people will make their choice have also voted.

The last three months have been filled with accusations and counter accusations from the candidates.

Security is tight in the state with over 11, 000 police officers ensuring a violence free day. There are also about 300 election observers and volunteers monitoring the poll.