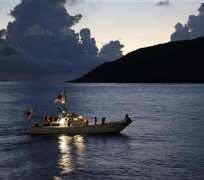 The uninhabited islands, known as Senkaku in Japan and Diaoyu in China, have long been a source of friction. Japan and China have competing territorial claims to the islets and surrounding fishing areas and potentially rich gas deposits.

The Japanese government will buy the islets for 2.05 billion yen ($26.15 million) and the owners will sign a contract soon, the Japanese dailies Asahi and Yomiuri said.

The planned purchase of the islands, controlled by Japan and claimed by Taiwan as well, will be approved in a cabinet meeting as early as mid-September, the newspapers said.

The row is part of a broader series of territorial disputes in the South China and East China Seas that have set China against U.S. regional allies such as Japan and the Philippines.

On Tuesday, China warned the United States not to get involved in the disputes, just as U.S. Secretary of State Hillary Clinton arrived in Beijing pledging to send a strong message on the need to calm regional tension.

Last week, a man ripped a Japanese flag from a car carrying Japan's ambassador in Beijing in the latest flare-up of the territorial row.

The Japanese government's plan to purchase the islets comes after Tokyo's nationalist governor, Shintaro Ishihara, proposed a similar plan earlier this year. The Tokyo metropolitan government sent a team of officials to waters near the islets at the weekend to conduct a survey. ($1 = 78.3900 Japanese yen)