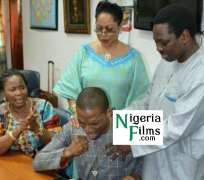 On Thursday, July 12, 2012, top music star, D'Banj was dragged to church by his mum as a result of a warning that entertainers should pray against death. This call was made by Pastor Wole Oladiyun of Christ Livingspring Apostolic Church (CLAM), Ogba, Lagos.

Close sources to the Pastor told Nollywoodgists.com then that Pastor Wole also warned D'Banj not to join illuminati or else, he would land in hell fire.

Weeks after the prayer, a picture has emerged online where D'Banj was captured praying fervently like a prayer warrior. His mother and the pastor joined in the prayer.

Who says D'Banj is not a prayer warrior?

Is Money Making Ritual the Only Way to Instant Wealthin Africa?