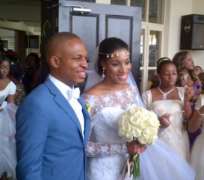 There are reports that Auto Lounge boss, Larry Onuegbu may land into trouble over his alleged shady deal in the controversial estimated N11m Porsche Cayenne car given to Naeto C as a wedding gift last weekend.

According to what Nollywoodgists.com gathered, Larry allegedly sold a 2009 model of the SUV to Naeto C's former brother-in-law, Dumebi Kachikwu as 2012 model.

This shady deal was exposed, as we learnt, when the 'new' toy was taken to a Porsche mart in Lagos after a suspicion that all was not well with the controversial car gift. At the mart, it was discovered that the Porsche Cayenne SUV believed to be a 2012 model was actually a 2009 model. This is against what Larry claimed the posh car is.

Interestingly, sources are claiming that Larry is not new in this kind of shady deals. He was alleged to be in the act of defrauding innocent and unsuspecting customers by selling his stock-in-trade and outdated cars to them as in vogue cars.

You will recall that D'Banj was first reported to have presented the wonder-on-wheel to Naeto C. Thereafter, Larry Onuegbu was reported to have bought the expensive car, but asked D'Banj to present it to the couple for him.

However, later reports confirmed that the car gift was actually from Naeto C's former in-law, Dumebi. The car gift is almost the most controversial wedding gifts presented at a celebrity's wedding. It has also gotten much media attention than expected.

On July 21, Naeto C was married to his wife, Nicole in Lagos where the controversial gift was presented.