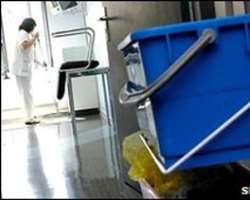 Scientists know bacteria can become inured to disinfectant, but research increasingly shows the same process may make them resistant to certain drugs.

This can occur even with an antibiotic the bacteria have not been exposed to.

Writing in Microbiology, the National University of Ireland team, who focused on a common hospital bacterium, urges a rethink of how infections are managed.

Scientists in Galway found that by adding increasing amounts of disinfectant to cultures of pseudomonas aeruginosa in the lab, the bacteria learnt to resist not only the disinfectant but also ciprofloxacin - a commonly-prescribed antibiotic - even without being exposed to it.

The researchers report the bacteria had adapted to pump out anti-microbial agents - be they a disinfectant or an antibiotic - from their cells.

The adapted bacteria also had a mutation in their DNA that allowed them to resist ciprofloxacin-type antibiotics specifically.

Pseudomonas aeruginosa is a bacterium most likely to infect those who are already seriously ill.

It can cause a wide range of infections, particularly among those with weak immune systems such as HIV or cancer patients, as well as people with severe burns, diabetes or cystic fibrosis.

Surface disinfectants are used to prevent its spread - but if the bacteria manage to survive and go on to infect patients, antibiotics are used to treat them.

Bacteria that could resist both these control points could be a serious threat to hospital patients, the study said.

At the high concentration levels generally employed this was unlikely to be a problem - but "in principle this means that residue from incorrectly diluted disinfectants left on hospital surfaces could promote the growth of antibiotic-resistant bacteria", said study author Dr Gerard Fleming.

"What is more worrying is that bacteria seem to be able to adapt to resist antibiotics without even being exposed to them."

There is an increasing body of research that raises concerns about the effects on antibiotic resistance of disinfectants and antiseptics.

An EU report published earlier this year stressed the importance of the "appropriate and prudent" use of disinfectants to minimise the risk that bacteria become resistant to both forms of defence.

It also emerged this year that treatments in hospitals in Brazil had been compromised by a bacterium, mycobacterium massiliense, which had developed resistance to a common sterilisation fluid and a number of antibiotics used to treat the subsequent infections.

"This was very significant because it was really the first incident related to resistance to a biocide which led to clinical failure, which is new," said Dr Gerry McDonnell, a researcher in the field.

"This really needs to be an area of active investigation and debate. But it's worth bearing in mind that disinfectants may not just be the problem, they may also be the cure."

Research was published this year showing that the disinfecting wipes used to protect against MRSA could in fact spread the bug, as the solution contained was often not sufficient to kill all the bacteria picked up, and hospital staff often used the same wipe to clean more than one surface. Source: BBC News