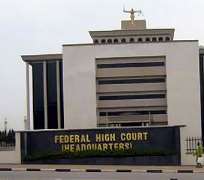 Before taking their plea, the prosecution counsel, Gift Odibo sought the court’s consent to file a motion on notice to amend a two-count charge filed earlier in the court, which was granted. The accused persons pleaded not guilty to both charges when it was read to them, and the prosecution consequently asked for a date to commence trial.

Counsel to the accused persons, Mr. J.A. Ako informed the court that he had filed a motion for bail, but prosecution counsel, Odibo objected to the application on the ground that she was only served the motion in the court. She added that she could not respond orally and will need time to prepare a written response to the bail application.

While adjourning the matter to 19th June 2012 for hearing of the bail application, Justice Kutigi ordered that the suspects be remanded in EFCC custody.

The accused persons, who are chairman and secretary respectively of Mbatoo Co-operative Society, were arrested following a petition from the Ministry of Mines and Steel Development. The petitioner claims that the accused persons fraudulently diverted a grant of N4, 826,850 awarded from the N120m World Bank/IDA loan. The facility was part of the $10m micro grant programme designed as a poverty alleviation scheme for Artisanal and Small Scale miners and Mining Communities.

According to the petition, the accused persons were given the N4, 826,850 for the procurement of Atlas copco XAS 47 Air Compressor, Jack hammer with accessories and Diaphragm water pump, but fraudulently converted the grant for other purposes.

Count one of the two count charge reads: “That you Adeboyega London and Sylvanus Benedict, being the chairman and secretary of Mbatoo Cooperative Society on or about 9th December 2000, at Abuja in the Abuja judicial division of the High Court of the Federal Capital Territory, did conspire to commit an offence punishable under section 97(2) of the Penal Code Act cap 532 laws of the Federation of Nigeria (Abuja) 2004.”