2015: BETWEEN TINUBU AND FASHOLA 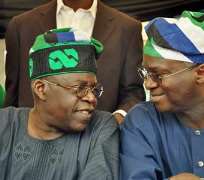 During the 60th birthday of former governor of Lagos state and Action Congress of Nigeria (ACN) leader Senator Ahmed Bola Tinubu, Mr. Babatunde Fashola(SAN), present governor of Lagos state was asked to present a speech to the ACN leader which he jokily asked Tinubu that many veritable ACN supporters are crying profusely that you do not give them the privilege to exercise their political franchise even when they are qualified for such position.The grandfather of ACN politics immediately responded to Fashola that the same political imbalance that brought you to power as Lagos state governor. The answer quickly means that Fashola was not the most competent or popular candidate to be the governor of Lagos state in 2007 elections but providence and political was bestowed on him.


It is obvious that 2015 Lagos state govearnorship election would not be easy for both father and son. It is of records that Fashola is one of the best ever-serving governors in Lagos state since its creation. His infrastructural development strides within his first tenure and one year of second tenure has invariably send positive signals to Lagosians that he can be elected for the senate if the need arises. But ACN politics is tactically difficult to understand the new music if you are not a direct member of the party.Though Fashola is competent enough to bring a candidate that would replace him in line with the party recommendation without any godfatherism manipulation.Most of the ACN members who were qualified to contest were being betrayed of their mandate in all ramifications.This denial of candidate's mandate has prompted many party faithfuls to defect to other political parties in Nigeria.Although Senator Bola Tinubu initiated some of these projects whom Babatunde Fashola has completed in his port of call.

The politics of Action Congress of Nigeria(ACN) could be digitally deduced to unfold the political scenario in 2015. Lagos state population is over 18 million people while the daily migration of people is at geometric progression. In Tinubu 's administration, he actually performed to some extent and he single-highhandedly coined out Alliance for Democracy(AD)and for Action Congress(AC) and later to Action Congress of Nigeria(ACN)He made the party not to be regionalized but the unfolding political calculations indicate that only South west and South-south region which is ACN strongly dominating at present. ACN is one of the strongest regional opposition political party in Nigeria which has publicly accused the ruling party as mere political jokers and nothing else.


But the question still begging for answer is that will Babatunde Fashola not relinquish power without living his political will and legacy behind. Every past governors in Nigeria like to be the father of their state politics and even be the absolute dictator if the need arises.The relevance of Bola Tinubu in South west politics is gradually fading away in due.time. The former President Olusegun Obasanjo lawfully resigned as Board of Trustee (BOT) chairman of the PDP when he vividly knew that the ovation was the loudest.In 2011elections in Lagos State Bola Tinubu only anointed some of his loyalists even when they were not qualified or failed to use their first term in office to provide infrastructure for its people.

Though Lagos state belongs to a political zoning arrangement only faithful loyalists succeeded in terms of political appointments and others. While other political parties are not on ground to wrestle power from the ACN.Most of the governors that served during Tinubu's administration across the country some are in EFCC net and jailed.In the last ACN local government elections in Lagos state, Most of the candidates were handpicked without party screening and others while some ACN supporters saw it as a breach of ACN constitution. Those who make laws are the breakers of the law in Nigeria.Though the Peoples Democratic Party(PDP) won some of the local governments especially Ajeromi-Ifeloun, Obalende LCDA, Badagry and others .

While some of these local government officials did not perform but were re-elected by powers that be.Fashola is quiet different from Tinubu in terms of leadership development.

was not granted.The zoning arrangement affected the deputy governor and the present speaker of the Lagos State House of Assembly and others. But many of these loyalists of the party felt Fashola would not perform but proved his critics wrong that he can perform in spite of all odds that beclouded the party in recent past years. Leadership tussle is one of the problems making half-baked leaders to be elected into power.in ACN while Congress for Progressive Change (CPC) is not left out.2015 is very critical year for both party leaders of the state. Apart from the opposition party bringing out their candidates for the governorship election which care is taken, PDP might capture the state.If the party still believes on its manipulation mechanism without putting efforts to fix rightful leaders into power, then the opposition parties will take over.Only few elected leaders of the party in the state are politically performing in their constituencies while looting spree is on the high side by voracious ones and nothing else.Would Tinubu allow Fashola to succeed as the next godfather of the ACN?Some ACN supporters are also eying the number one seat of the state while Fashola will want to write his name in the ACN politics.


Lastly , ACN must put his house in order before 2015 while Fashola must not be carried away by political vampires who want to create unnecessary altercations with his political father, senator Bola Ahmed Tinubu. Tinubu is one of the Youraba politicians who fought massively to retain the politics of the region.Tinubu must be commended for his courageous effort to bring Fashola into government. ACN as a party can be firmly stand if all the stakeholders of the party can work as one family without compromise or inferiority complex.The media must not be used by political foes of the party to cause imbroglio among party leaders . Tinubu should also anoint competent candidates not loyalists that are mere empty heads with no political mission to build the party .The future of the party should be preserved.Only time will if Fashola will contest for any position in 2015.