BOKO HARAM CONTROVERSY: WHY AIRFORCE OFFICER WAS RECALLED, BY PRESIDENCY 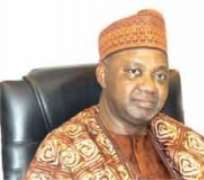 • Sambo Seeks Peace With Group
THE Presidency and the Nigeria Airforce (NAF) last night explained the re-instatement of an officer alleged to have links with the Islamic sect, Boko Haram.

In separate interviews, spokespersons for both institutions said the suspect, a Flight Officer, was found not culpable of the allegations against him.

They said there was no evidence that he was connected to or communicated with the Islamic sect.

The explanation followed a petition lodged with the Presidency by a group of Airforce officers over the recall of the accused officer to the force.

Meanwhile, Vice President Namadi Sambo has restated the Federal Government's openness to the use of dialogue in ending the spate of terror attacks in the country.

The VP called on members of the Boko Haram to lay down their arms and embrace dialogue.

Sambo, who identified the sect by the name 'group' at the closing ceremony of the second edition of the Nigerian Air Force (NAF) Air Exposition 2012, which marked the 48th Anniversary of the Service, said:

'I must say that we are leaving no stone unturned at ensuring the safety of life and property of all Nigerians and our visitors by subduing the current security challenges we are facing.

'We are still calling on the group to take our offer for dialogue in the interest of peace and development of our country.'

The Airforce officer was accused of giving a ride to Kabiru Sokoto, the suspected planner of the bombing of St. Theresa's Catholic Church in Madalla, Niger State, last Christmas.

The bombing of the church, claimed by the Boko Haram, killed 37 people and wounded over 50.

Sokoto, arrested at the Borno State Governor's lodge in Abuja, was to later escape from the hands of police investigators, until he was re-arrested by the Department of State Security officers in the border state of Taraba.

His escape on January 18 prompted President Goodluck Jonathan to sack the Inspector General of Police, Mr. Hafiz Ringim and his six deputies.

Presidential spokesman, Dr. Rueben Abati, confirmed last night that the Airforce officer was actually arrested along with some people, in the wake of the Madalla incident and Sokoto's escape from the police.

He, however, noted that following investigations, it was concluded that the officer was innocent of the allegations against him.

According to Abati: 'The police did not only release him (the officer) to the Airforce, but they also wrote that he was innocent and it's on the strength of that that he is absolved.

'The Airforce has no option than to re-instate him.'

Similarly, the Airforce said that the officer in question was not found guilty of the claims against him.

An Airforce image maker said that the officer was 'arrested, detained and interrogated and released after four months because he was only found to be at the wrong place at the wrong time,' adding, 'he had no direct communication with Boko Haram.'

The spokesperson said the Police and Airforce interrogated the officer and he was cleared of all allegations against him.

Going by the report, investigations relating to the matter were coordinated by the office of the National Security Adviser (NSA).

However, the aggrieved Airforce officers' petition to President Jonathan questions the rationale behind the recall of the Flight Officer.

The officers accused a top military chief, as the brain behind the protection and exoneration of their colleague for the 'grave' offence.

The petitioners claimed that to show to the public that he (the military chief) was unbiased, he arraigned the Flight Officer on flimsy offenses, 'which would not give him the appropriate punishment. He was first restricted to the Base and then tried and only warned.'

They alleged that the accused officer 'and Sokoto were found together in Borno State Governor's lodge in Abuja… serves in Kaduna, and without permission, covered Sokoto with military presence to Abuja in order for Sokoto to escape the law.'

The officers said they were aggrieved because the accused was only charged with light offences, which they listed as:

• Disobedience to particular orders; and
• Conduct to prejudice service discipline.
The petitioners stressed that the officer ought to be charged with the following offences to earn dismissal and imprisonment, if found guilty:

• Concealment of (a) wanted person;
• Absence from duty post (there was a ban on leave and passes in the armed forces);

• Crime against the nation.
The protesting Airforce officers urged the president to cross-check their facts 'fast and take appropriate action to avert further suffering of Nigerians.'

Speaking at a separate event yesterday, the Vice President noted that even though the government was pursuing dialogue as a way of enthroning peace in every part of the country, the military and other security agencies were well-prepared to enforce and maintain security.

He echoed President Jonathan's need for a strong and proactive military in prosecuting the transformation agenda of the present administration.

According to him, 'President Goodluck Jonathan clearly captured the mood of the nation when he stated that a strong, modern and proactive military is pivotal to achieving the administration's transformation agenda, especially in the face of the ongoing security and development challenges.

'The military, in pursuance of its tradition, has been actively engaged in the full defence of our territorial integrity, as well as maintaining our sovereignty.'

He the military was pivotal in quelling internal insurrection due mainly to the inadequacies of the needed manpower in the Police Force 'to which government is committed to address with the urgency that it desires.'

Sambo expressed joy at the success of the Air Exposition, stating that if the standard were sustained and improved upon, the Nigerian Air Force would emerge the most formidable in Africa.