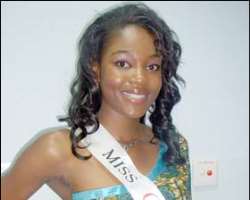 Twenty-year-old Miss Ghana USA 2009, Krystle Simpson, is currently in Ghana embarking on a nationwide educational and tourism tour to help empower women and as well employ Ghanaian youth not to relent in the fight against HIV & AIDS.

The month-long tour which began last Tuesday, June 6, under the theme: “Supporting Education And Tourism In Ghana,” is part of Miss Ghana USA's official project to give back to society what it had given her.

Speaking in an exclusive interview with BEATWAVES at the launch of the tour, which was organized by Gold Star Foundation, a Christian foundation, at the Ghana Journalists Association Press Centre in Accra on Monday, Krystle said she would be using the tour to organize programmes and workshops to encourage women to aspire for higher positions in society.

According to her, women are vibrant instruments whose opinions are necessary for the development of every country.

Hence, she said there is the need to institute some measures to encourage more women, who are interested, to be part of the decision making process of the country.

“There are a lot of women out there who are already interested in becoming members of Parliament or want to be in government.

What we are going to do is, we are setting up different workshops that would help them sharpen their skills as in policy making, research and analysis and also encourage the media to help them,” she said.

She will also create awareness to fight against HIV & AIDS, as she still believes that the message needs to be reinforced. Besides, she will raise funds to provide books and clothes for some deprived children and women in the various communities she will be touring.

Some targeted cities she will be touring include Kumasi, Takoradi, Cape Coast, Akosombo and other important parts of Ghana.

Krystle who hails from Cape Coast resides in German Town, Maryland, where she attended the Montgomery College and majored in pre-medicine with her ambition of becoming a physician one day.

Krystle takes her education very seriously. She had the pleasure of being part of her school's basketball team and was selected the captain in her second year.

Besides teaching her to be a team player, the opportunity has taught her the importance and principles of being a leader and a role model to her teammates. Apart from being passionate about education, Krystle is actively pursuing a career in modeling, which has also been her passion and dream whilst growing up.