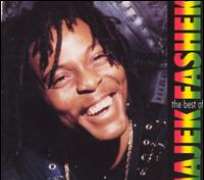 America returnee Reggae star Majekodunmi Fasheun a.k.a Majek Fashek and Kora awards winner,Prince Wadada's newly established friendship which has been existing for months since Majek relocated to Nigeria has hit the rocks.

The two Edo born Reggae musicians,we can confirm,are no longer best of friends.

We learnt that the rain maker,Majek threw out Wadada from his newly rented four bedroom apartment in Gowon Estate,Egbeda Lagos.

Majek,as we gathered had a few weeks ago become furious and threw out all Prince Wadada's belongings out of the room he allocated him in the apartment.

The prisoner of conscience singer Majek also sacked Wadada's wife and kids from the house after which he put the room under lock and key.

Sources say Majek was assisted in the action by his personal body guards and members of Oodua People's Congress(OPC) in the locality.

Majek according to our source had told people who gathered to settle the matter that he had on many occasions caught Prince Wadada using his cell phone's video camera to record him,anytime that he is not in a good position.

He is used to filming me whenever I am in my rest room or sleeping without my pants on and I have warned him many times,but he refused to listen,until I caught him doing same thing today

Majek was quoted to have told the people.

When we called Prince Wadada to confirm the story,his line went unanswered.

But our further investigation reveals that the two began to live together sometime in the month of March this year,when Prince Wadada was forced out of a rented house he was living with his family,following a misunderstanding with his landlord.

It would be recalled that the said apartment where Majek is currently occupying was rented for him by A+Global Entertainment,the management firm that he is currently signed on.