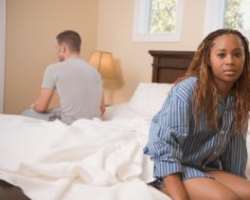 Women are more likely than men to suffer damage to their health from being in a strained marriage, research suggests.

US psychologists found wives in tense marriages were prone to risk factors for heart disease, stroke and diabetes.

In comparison, husbands seemed relatively immune from such problems.

Details of the study, based on 276 couples who had been married for an average of 20 years were presented to the American Psychosomatic Society.

Each couple filled out questionnaires designed to assess the good and bad aspects of married life.

They were also rated for how depressed they appeared to be, based on their self-reported symptoms.

pointing to a raised risk of serious disease, such as heart problems.

Women in strained marriages were more likely to be depressed and to have a greater number of symptoms of metabolic syndrome.

But although husbands in unhappy marriages were also depressed, they did not show signs of physiological damage to their health.

Researcher Nancy Henry, from the University of Utah, said the team had expected to find that negative aspects of a bad marriage, such as arguing and being angry, would translate into both mental and physical problems for both sexes.

Much more to learn
She said: "We found this was true for wives in this study, but not for husbands.

"The gender difference is important because heart disease is the number-one killer of women as well as men, and we are still learning a lot about how relationship factors and emotional distress are related to heart disease."

Professor Tim Smith, who co-led the research, said there was good evidence that a healthy diet and regular exercise could reduce a woman's risk of metabolic syndrome.

However, he said: "It's a little premature to say they would lower their risk of heart disease if they improved the tone and quality of their marriages - or dumped their husbands.

"The immediate implication is that if you are interested in your cardiovascular risk - and we all should be because it is the leading killer for both genders - we should be concerned about not just traditional risk factors such as blood pressure and cholesterol but the quality of our emotional and family lives."

Christine Northam, a counsellor for the charity Relate, said there was plenty of evidence that people in a stable, happy relationship enjoyed both good health and a longer life expectancy.

She said: "The gender difference could be partly due to the fact that women's hormonal profile is more complex than men's.

"Women also tend to worry more about their health than men."