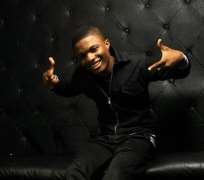 According to Akon, the deal was not yet officially done until today.

In a tweet by the superstar yesterday April 11, Akon tweeted, "and I will be making a special announcement tomorrow... Nigeria STAY TUNED!!!

Just a few minutes ago, Akon tweeted, "It's OFFICIAL!!!!!!! KONVICT/EME is now the official label for WIZ KID worldwide. WOW!!!! Hope u ready!

With this announcement by Akon, Whizkid is now officially Konvict Music/EME property.

Whizkid has already done a collaboration with Akon. Other Nigerian stars under Konvict Music are P-Square and 2Face, though has denied being signed under the music label.