For kids in "Slumdog" slum, life is not as upbeat 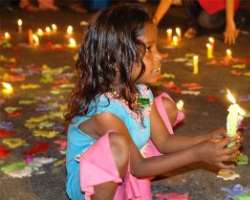 In Nehru Nagar, the teeming Mumbai slum featured in the Golden Globe-winning film "Slumdog Millionaire," the only music heard is on tiny radio sets and the young boys have no ambition to appear on quiz shows.

While the crowded slum with its unpaved alleys, open sewers and tiny shacks is faithfully portrayed in the film, for the kids playing cricket with wooden planks near a smoking landfill, the story of protagonist Jamal Malik is unimaginable.

"I have never even tried to get on a quiz show on TV," said Siddhant, a cheerful 12-year old, shrugging his shoulders.

For Siddhant, who studies in the seventh grade in a nearby school, his role models are cricketers and his hero is Sachin Tendulkar, India's batsman.

He and his friends have little interest in watching "Slumdog Millionaire," which was mostly shot in Nehru Nagar and nearby Dharavi, when it is released in India next week.

"We saw some parts of the shooting, and that was nice, but I won't see the film," said Alpesh, also 12.

"I only like Shah Rukh Khan films," he said, referring to the popular actor who usually plays the romantic hero in big-budget Bollywood productions.

GET A PEEK
Director Danny Boyle, in publicity material for a film he called a Dickensian tale, said he shot in real, gritty locations "to show the beauty and ugliness and sheer unpredictability" of Mumbai.

About half of Mumbai's 17 million people are homeless, and a vast number live on the streets or in about a dozen slums that lack even basic facilities such as running water and toilets.

"Slumdog Millionaire," which tells the rags-to-riches tale of an orphan from such a slum, won four Golden Globe awards on Sunday, including one for Indian music composer AR Rahman.

But there is little upbeat or ambitious about Nehru Nagar, and some newspapers have criticized Boyle for romanticizing the slums and peddling such grim realities as the beggar mafia, prostitution and crime as "Indian exotica."

Others have sprung to Boyle's defense.
"If through (the movie) the world gets a peek at an India inhabited by millions of people who continue to live their lives without clean water, sanitation or electricity, what is the problem?" wrote Kalpana Sharma, author of a book on Dharavi, Asia's largest slum, in the Indian Express paper.

India's own film industry, best known for its racy action flicks and lush romances, has delved before into the slums in Mumbai occasionally, and there is growing interest from tourists.

Reality Tours & Travel, which offers guided tours of Dharavi, calls the slum "a place of poverty and hardship but also a place of enterprise and humor," saying the tours are meant to dispel the negative image that many people have about slums in Mumbai.

"People want to understand how the country works, experience a culture that is alien to them and goes beyond the standard tourist spots," said co-founder Chris Way.

To people in the slums though, a movie like "Slumdog" probably would not make a huge difference because "they are just too busy getting on with their lives," he said.

That thought is echoed by 14-year old Rajan, who when asked what he would do if he won a prize, shrugs his shoulders.

"What would I do with all that money?" he said.