UDUAGHAN, CLARK RETURN TO THE TRENCHES 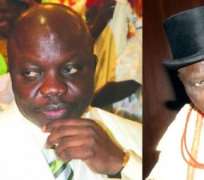 EMMANUEL ADDEH writes that true to pundits' prediction, the newly-found love between Governor Emmanuel Uduaghan of Delta State and elder statesman, Chief Edwin Clark, is heading for the rocks again

As predicted, the Peoples Democratic Party's congresses in Delta betrayed all insinuations that a peace deal had been sealed between the two factions of the party in the state.

The gulf left by the actions of the various factions within the two major groups is now even more gaping, despite the efforts by various stakeholders to resolve the unending struggle for power and respect in the state's political clime.

The long-drawn battle between the two factions, led by Governor Emmanuel Uduaghan and Chief Edwin Clark, has been on in the past six years with a very slim likelihood that it would end soon.

Sensing the danger in going into the congresses with a factionalised party, Uduaghan had initiated reconciliatory moves with Clark, who is regarded as the right hand man of President Goodluck Jonathan in the state.

The governor also met with the Minister of Niger Delta Affairs, Mr. Godsday Orubebe; wife of a former National Chairman of PDP, Dr. Mariam Ali; former member of the House of Representatives, Dr. Cairo Ojuigboh and Mr. Ndudi Elumelu and others, who were seen to have aligned with Clark.

Part of the concessions reportedly given by the Uduaghan group was to support the return of Mr. Peter Nwaoboshi as the chairman of the party in the state, despite speculations that the next governor would likely emerge from the same area.

But in spite of all the efforts, those close to the politics of the state knew that it was only a matter of weeks for a breakdown to be noticed in the purported deal.

An indication that all was not well with the arrangement emerged during the first leg of the congress to elect ward leaders. In fact, the election became bloody at a point.

The fracas, which reportedly happened between Ojuigboh, a Clark loyalist and a former Speaker of the state House of Assembly, Mr. Martins Okonta, at the PDP secretariat in Asaba, the state capital, led to the hospitalisation of the latter.

The bone of contention between Okonta, an Uduaghan loyalist and Ojuigboh, was about the choice of a returning officer for Ika South Local Government Area of the state.

Okonta, according to reports, had insisted that Oritsebubemi Nanna, Returning Officer for Ika South Local Government, was not a neutral umpire.

While Okonta was rushed to St. Luke's Hospital, Asaba, where he was attended to by a team of medical experts, Nanna was spirited to an undisclosed hospital, also in the state capital.

Nanna told journalists, 'Okonta said as a member of the house of assembly, he must be accorded respect and it was then the party chairman told him that it's not done that way.

'Suddenly, Okonta attacked me in the chairman's office right in the presence of (Ndudi) Elumelu, Ossai, both members of the House of Representatives and other party leaders.'

He said he protested against accepting Nanna as an umpire because he (Nanna) is the Personal Assistant to Ojuigboh, a PDP leader in the LG, adding that it would be unfair and fraudulent to allow him.

However, Ojuigboh, who immediately took Okonta to court over allegations that he personally attacked him, accused a serving senator, Ifeanyin Okowa, of being the brains behind the imbroglio.

As if the two gladiators (Clark and Uduaghan) had sent their foot soldiers to test the waters on their behalf, it finally came to public attention a few days before the last leg of the congresses last weekend that there was still no love lost between the two.

The final straw, it was learnt, was the reluctance of the governor's faction to agree to share all positions in the state congresses on equal basis, having conceded the chairmanship position to the Clark faction.

The Clark group, in a communiquÃ© released after its meeting, accused Uduaghan of treating its as 'second class' members in the party, who did not deserve any respect.

The faction, which was led by former Minister of State for Education, Mr. Kenneth Gbagi, stated that its members were opting out of the deal with the state governor, describing discussions with the governor's faction as a 'total failure.'

But in a swift reaction, Uduaghan told journalists that the aggrieved faction, which met in the house of a chairman of the Elders' Council of the Clark's faction, Chief Godwin Ogbetuo, were not members of the PDP in Delta State.

Uduaghan claimed that all those who attended the meeting where he (Uduaghan) was accused of not dealing straight with the Clark group were merely members of the opposition Democratic Peoples Party, who campaigned for Chief Great Ogboru in the last election.

Clark could not personally attend the meeting as he was said to be away on a medical check-up abroad, but the former Federal Information Minister called in during the discussions to express his 'hundred per cent' support for his loyalists' action.

'I cannot be a party to this process. I totally dissociate myself from all the processes that have led to the present state of things,' Clark said in a telephone call.

Gbagi told the gathering of Clark's loyalists that after several attempts at mending fences with Uduaghan and his faction, he had realised that the two parties could not work together.

'But the entire process has been a charade and a child's play. The whole process has been crooked and deceitful and we will not be a part of it. We are asking for fresh congresses in the state because no election took place.'

Corroborating Gbagi, Ogbetuo stated, 'We have reviewed the progress made and it is a total failure. The harmonisation of positions as done by the governor's faction is like  treasonable felony against democracy because the two factions agreed that positions should be shared 50/50. They have flouted the agreement.'

But while dismissing the faction, the governor said, 'These are mainly people from Chief Clark's group who are not in PDP but DPP and have refused to join the PDP properly.

'These people never attended any of the PDP meetings held in Asaba or Warri. The agreement was for everyone to go to his or her ward for the ward congress. They refused to go and kept on calling Chief Clark, who is in the UK and they have been feeding him with lies.

'The minister (Orubebe) and I, to the best of our knowledge and that of the national secretariat, have been deeply involved in bringing normalcy to the party and these non-party members cannot derail us.'

Though the congress, which returned Nwabaoshi as the chairman of the party last Saturday went without any major incident, pundits are of the view that the existing gulf between the two gladiators would continue to widen until a faction of the party in the state stops using its connection with Abuja to engage in 'unfair' negotiations.

This was probably Uduaghan's thinking at the Cenotaph in Asaba, after the congress last Saturday, where he described some members of the party as the Biblical Judas and mischief-makers.

Uduaghan warned those he said were fond of causing divisions in the party to steer clear, adding that they would be 'moving against a mighty force.'

'Anyone that moves against what has been put in place today might be moving against a mighty force. This factionalisation cannot be forever. We will no longer pay attention to the Judas among us to avoid distraction.'

But Judas or not, it is believed that the deep-seated disagreement between Uduaghan and Clark would linger till the end of the current administration. Reason: Various reconciliatory committees and interventions by stakeholders in the past six years have not worked because, for the gladiators, it is about power, respect and control of the state PDP machinery.