What Can A Woman Do Better? 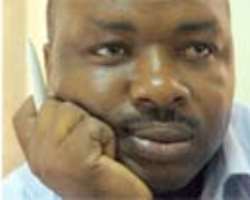 The adage: “What a man can do a woman can do it better”, has become so common in use that one is at a lost whether what we say with our mouths we mean it deep down in our hearts. It has been over flogged like the dead horse and like the Biblical salt it has lost its 'taste' with the passage of time.

These days when you hear people making reference to that adage it is because we are truly and sincerely acknowledging the fact that the daughters of Eva could be equal or better to the task that 'Adamu's' sons boast of doing without equals.

The recent National Awards which recognized the work of many 'Shiabiis' who have progressively climbed up the ladder to the pinnacle of success thus joining the club of 'Bungalowbii, saw many daughters of Eva winning many of such awards.

Among such hard working women was Mrs. Gina Blay, who through hard work and the sense to succeed as a 'Kokonsa' woman has established one of the bourgeoning 'kokonsa' houses in Ghana.

For some of us, we think that she has gone beyond that cliché and had practically demonstrated that to succeed in this world of 'selfish' machomen, one needs to bulldoze her way through thin and thick.

She does not need to keep re-echoing that cliché in the eardrums of her 'siblings of Eva' to justify a cause but through her affection and affability many of the daughters of Eva, who are practicing as 'kokonsa' people have been given the best opportunity and the platform to nurture and develop their talents. All that you need is to push forward an idea and if she is convinced that that idea is super she gives you the go-ahead.

It was therefore sense of joy that such a woman and other gallant women should be recognized at the highest level with a National Award.

To her and other women we say Mama Gina, Ayekoo!

The types of Mama Gina unfortunately are few in the system. In fact, they are like gems we read about in fairytales and as a treasure it is simply priceless.

Unfortunately, while the types of Mama Gina are giving the young 'daughters of Eva' the opportunity to progress, probably from 'Shiabii' status to 'Bungalowbii', others are rather suppressing their kith and kin. Many women of high position, who have been 'championing' the rights of women in the open turn to 'maltreat' women who are their subordinates. There had been harrowing incidents of woman bosses making it hell for their secretaries and other staff members working in their establishments under them.

The attitude of women these days, especially the young daughters of Eva, is raising a lot of concern to many of us as a result of the many contacts that had been established over a period of time.

As I mentioned in my last piece on 'Sakawa', where young men are alleged to be indulging in 'Sika duro' or 'Sakawa', their women counterparts have resorted to cheap and easy way to life.

I'm sure if I mention the issue of 'send me credit' craze that has become like a second national anthem you would be nodding your oblong head in approval.

The situation is so alarming that it looks like they have been let loose and like the wild fire, they consume with ferocity any man that comes their way.

If a woman begins to 'flash' your phone without ceasing then be ready to buy her some credit or do some 'transfer' for her. The excuses are simply 'fantastic'. “Please, I'm stuck somewhere and I need to make some urgent call. Can you please send some credits to me?” Got stuck somewhere indeed!

Some would like to go like; “Oh I haven't heard from you for a long time. Can you do me some favour? Can you please send me some credit?

Being a gentleman and needs to flex your muscles 'small' they don't only transfer the credit you go for the biggest.

Surprisingly the only time she would call you is; “Thanks very much for the credit”. That is the end of the story.

After about a week or two, the lady who benefited from your 'generosity' begins to 'flash' you again. Don't let such 'flashes' get on your nerves because such 'flashes' are to tell you that the earlier credits have been exhausted and therefore more of those are needed. Meanwhile you never received any call on the credit you sent.

Another cause of worry is the level majority of our women have turned into 'beggars'. The ladies of today, as if they had met to hatch this 'conspiracy theory act' and decided to 'suck dry the blood' of men, are using relationships as the panacea to their problems.

If you are not careful, you would be paying some 'huhudious' levies including money for 'chop money'.

One would argue that the economy is the cause of this abominable act because there are no jobs or the jobs are not paying well. Yes, that could be possible but I'm sorry to say that most of the ladies are lazy and all they want is cheap way to life.

There have countless number of such ladies despite their level of education and economic positions they still depend on men for everything. Yes, everything from credit buying to 'take me to lunch' and 'I need money to pay some bills'.

How can a woman exert her 'I can do better' agenda if she cannot do away with that 'dependency theory?'

They have not demonstrated enough that given all the 'support' from institutionalized and conscious measures they can do better and retort to still being hangers-on.

You may have problems but that is not enough to say that you should go into a relationship or having 'boyfriend' to be giving you money. Many relationships; be it platonic or 'amorous', have been turned to 'one-way traffic' where the women keep on asking for insatiable demands.

There are also a few others who no matter what they won't take any penny or gift from the opposite sex. They do not need that as a demonstration of 'your love' for them. No way!

Please, my sisters out there sit up and take your destiny into your

hand and work hard for there is joy and dignity in hard work.