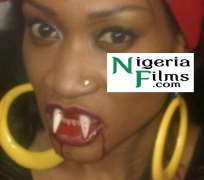 In this part of the world, stories of vampires are considered as mere fork-tales. Some may have known about them through American movies.

Fear and panic were the order of the day when sultry actress, Oge Okoye turned into a vampire. The actress, who recently featured in a Yoruba movie with Fathia Balogun, started attacking different people.

According to the gist relayed to Nollywoodgists.com, Oge Okoye diabolically a sense of power and authority as a cult member, which she uses to satisfy her sexual urge by killing her victims.

Oh, lest I forget, did I tell you that the picture described above was a well scripted Nollywood movie? Sorry I didn't.