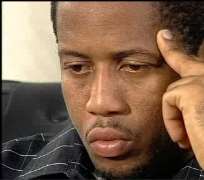 According to gist flying into Nollywoodgists.com, top actor, Mike Ezuruonye may have landed himself into trouble.

We learnt that the actor, who has been in Canada since 2011, before the arrival of his first child, is currently battling hard with an impostor, who goes about using the actor's name to defraud people.

The latest means of this fraudulent act, we reliably gathered is the use of a Blackberry pin supposedly to be of the fair-skinned actor.

We confirmed from a source close to the actor that a particular Blackberry user has been going about to defraud some innocent fans of Mike with the BB pin 287F7B8E.

This development, we gathered has become a disturbing thing for Mike, who no longer find it funny anymore due to the effect the act is causing having on his image.

According to the source, "Mike is on the track down of that BB user, he will surely report the matter to the necessary authorities for quick action."