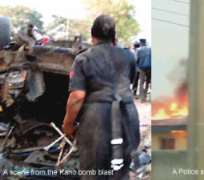 The ancient city of Kano yesterday came under heavy attack, as persons suspected to be members of the dreaded Boko Haram Islamic sect launched a simultaneous offensive, killing an unspecified number of persons, including police officers. Several others were injured.

The multiple bomb blasts, which rocked the state capital after the Friday Jumat prayers, occurred for several hours and spread through several areas in the state capital, resulting in pandemonium.

Saturday Sun gathered that the office of the Assistant Inspector General of Police, Zone 1 was first attacked, when a suicide bomber rammed a vehicle into the office complex.

In the attack, about two low-ranking police officers, whose identity could not be established and a civilian were killed. The tailoring section of the police zonal office was affected in the blast.

An eyewitness told Saturday Sun that all the windows of the offices were shattered by the blasts, adding: 'It is very likely that the building complex will collapse in the future, as a result of the explosions.'

Also, the office of the State Security Service (SSS), along Ginginyu area, was attacked yesterday. In the attack, a suicide bomber drove a bomb-laden Hilux vehicle into the building.

Eyewitnesses revealed that when SSS officers refused to open the gate for the vehicle, the suicide bomber rammed through the gate forcefully. SSS operatives stationed at strategic points in the complex opened fire on the vehicle and demobilised it instantly. They thereafter detonated the bomb on the vehicle.

In a similar attack, another set of bombers descended on the Farm Centre Police Station located behind the popular Maraba Cinema and released all the armed robbery suspects. The police had responded, thereafter, leading to heavy shootings in the area. Unconfirmed report said that several people killed and injured.

A source also told Saturday Sun that there were shootings at the Zaria Road Police Station, where the police engaged attackers in a gun duel.

At the time of going to press last night, the police station was on fire. A source told Saturday Sun: 'When the members of the sect took over the station, they first set all the criminals in detention free and later there were explosions, which set the station on fire.'

He revealed that a team of armed policemen came on a rescue mission and engaged the attackers in a gun battle.

The Bompai headquarters of the Nigeria Police was also attacked. Suicide bombers allegedly attacked the residential area of the police complex, but were resisted by policemen.

Following the attacks, confusion reigned in Kano last night, as residents ran for safety. A number of cars rammed into each other, in the melee.

Soldiers have been deployed to maintain security in the ancient city, as they guard parts of the state capital and patrol the streets.

Police Public Relations Officer (PPRO), Magaji Majiya, could not be reached for comments, as his phone was not available. The actual death toll could not also be confirmed.

Meanwhile, the Kano State government has imposed a curfew on the state capital.