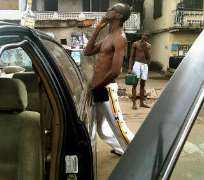 Please let the world know that we have a right to demonstrate peacefully but our government shot tear gas at innocent, peaceful protesters,"We, the youths of Nigeria, won't stop until this insensitive and wicked act is reversed.

President Jonathan and his friends will eat N1 billion worth of food in 2012, while fuelling their cars for N1.7 billion. This amount will build at least, 50 good health care centres in the South-South

N200 million was budgeted to water the gardens of the President in 2011. This is enough to educate 200 Nigerians through university education

BOTTOM LINE: Government seeks to impoverish us the more by removing fuel subsidy while they continue to waste money on their friends and families!

ACTION PLAN: We will have PEACEFUL PROTESTS in all the 36 states + FCT from Friday 6th of January 2012 at 10am. We do not condone violence so why not Join US and also spread the message to everyone around you. WE shall prevent people from going to work and helping the government inprison us in poverty while the 'leaders' buy mansions and travel all over the world.

The London Metropolitan Police hours ago granted permit to Nigerian Students In Diaspora and Nigerians In Diaspora under whose umbrella the Friday rally will hold ...in London

Date: Friday 6th, January 2012
Venue: London Charing Cross Station
Time: 12:30
Please inform every Nigerian you know and friends of Nigeria to come out in their numbers to voice their angst against this insensitive and irresponsible Nigerian government

Written and posted to BBM network by Adetokunbo A. Onasanya