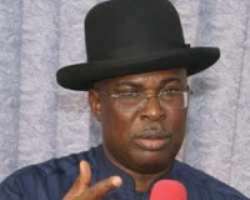 LIKE a phoenix, the exclusion of Bayelsa State Governor Timipre Sylva from the governorship primary in the state may come up again as governors of the Peoples Democratic Party (PDP) meet today.

The governors are set to meet with the leadership of the party under the auspices of the National Executive Committee (NEC) in Abuja.

The Guardian learnt that although the main agenda of the 57th NEC meeting is the ratification of plans for the national convention of the party to elect their executives, the governors on the platform of the party are ready to use the occasion to raise the issue of the governorship primary in Bayelsa State where the party has endorsed Henry Dickson.

Sylva, also of PDP, has taken to litigation asking the court to invalidate the governorship primary in which Dickson was announced as the standardbearer of the party for the governorship election holding in the state early next year.

The leadership of the party has recognised Dickson and forwarded his name to the Independent National Electoral Commission despite the boycott of the primary by the commission.

Sources at the national secretariat of the party in Abuja told The Guardian that the governors have mobilised themselves for the battle at the NEC meeting today.

It was learnt that when the leadership of the party got wind of the move by the governors, there was an attempt to postpone the NEC meeting but it dawned on them that it has to hold because the national convention of the party where a new leadership would emerge will hold early next year.

Besides making up their minds to put up a fight for Sylva today, the state helmsmen have mobilised members of NEC from their zones and states to be at the meeting tomorrow in case there may be a need to vote on the matter.

It was learnt at the time of this report that the governors were holding a meeting in Abuja to perfect their plan.

The national publicity secretary of the party, Prof. Rufai Ahmed, could not be reached because a source said he was in a meeting, but a top member of the party, who spoke on condition of anonymity, said: 'We are not aware that the governors are coming to protest anything done by the party because we have governors who are part and parcel of all things that go on in the party.'

The NEC meeting is expected to ratify the zoning arrangement agreed upon at the meetings of National Caucus and the Board of Trustees (BoT).

Author of this article: From John-Abba Ogbodo, Abuja