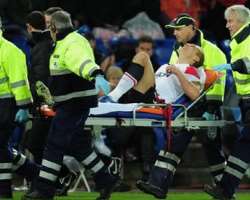 Manchester United have confirmed that captain Nemanja Vidic will miss the rest of the season after suffering knee ligament damage in their 2-1 defeat at Basel in the Champions League.

The centre-half, 30, twisted his right knee tussling with Basel's Marco Streller during the first half.

"Nemanja is out for the season," United boss Sir Alex Ferguson said. "It is bad news. He will be a loss.

Ferguson had hoped his captain would only be missing for a couple of weeks.

He said: "[Vidic] sees the specialist on Monday to map out the progress of when he has the operation. It won't be immediate because we have to let the swelling come down."

Vidic immediately looked in distress after the incident and was carried off on a stretcher before leaving the ground on crutches.

The Serbian was replaced by Jonny Evans as Ferguson saw his side crash out of the Champions League at the group stage for only the second time since 1994.

It is a major blow to United, who had enjoyed six clean sheets in eight games with Vidic in the side since his return from a calf injury in October.

Ferguson could be without nine first-team players for this weekend's visit of Wolves, a game in which victory would lift the club to within two points of leaders Manchester City, with their rivals playing Chelsea on Monday.

Michael Owen, Anderson, Tom Cleverley, Fabio, Rafael and Javier Hernandez are among those on the sidelines, while winger Ashley Young looked to have aggravated his toe injury against Basel where he was substituted in the second half.

Striker Dimitar Berbatov, who has been struggling with an ankle injury, missed the Champions League game but could return against Wolves.

Despite a long injury list and questions being raised about the quality of the squad, Ferguson insists the club will prove doubters wrong.

"These young players have already achieved many things," Ferguson said.

"Chris Smalling, Phil Jones and Danny Welbeck have all played for their country. These [players] will be the foundation of the club in a few years' time.

"These young players got a nasty experience on Wednesday but they know they have the trust of myself and their coaches.

"They will not be hounded because of one bad performance. Time will prove us right."