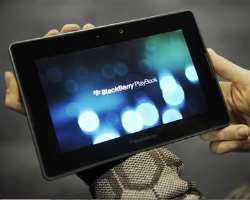 Three hackers say they have exploited a vulnerability in Research In Motion's PlayBook tablet to gain root access to the device, a claim that could damage the BlackBerry maker's hard-won reputation for security.

Root access means a user has permission to alter any file or program on a device and can control hardware functions.

In a response to queries, RIM said it is investigating the claim, and if a "jailbreak" is confirmed will release a patch to plug the hole.

The three hackers - who identify themselves as xpvqs, neuralic and Chris Wade - plan to release their data within a week as a tool called DingleBerry.

Apple's iOS and Google's Android operating systems are frequently attacked by users who want to run programs that have not been authorized by the manufacturers, but breaches of RIM's software are more rare.

The PlayBook runs on a different operating system than RIM's current BlackBerry smartphones. However, the QNX system will be incorporated into its smartphones starting next year.

The PlayBook in July became the first tablet device to win a security certification approving it for U.S. government use.

In a video posted on YouTube, Wade shows the DingleBerry tool allowing the PlayBook to access the Internet video service Hulu, which is not currently available on RIM's tablet.

Hulu, a service from Comcast's NBC Universal, News Corp's Fox and Walt Disney Co's ABC, blocks all mobile browsers by default and has yet to offer an app for the PlayBook.

A second video showed neuralic typing commands into a computer to turn the PlayBook's LED indicators on and off.

A source told Reuters that RIM had previously closed a PlayBook vulnerability that allowed a pre-loaded racing game to force a user to watch an introductory video.