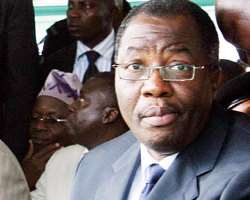 
The former governor who was previously facing 16 counts now has a total of 43 counts bordering on theft and misappropriation of state funds and assets.


In the additional charges presented before the Federal High Court Sitting in Abeokuta by the EFCC prosecuting counsel, Mr. Rotimi Jacobs, Daniel was alleged to have failed to declare his assets contrary to Section 27(3)(b) of the EFCC Act, 2004.


Daniel was also alleged to have stolen and fraudulently converted an aggregate sum N911, 958, 468. 54, property of Ogun state government which sum was part of the funds meant for the execution of Ijebu Ode Water project awarded by the Ogun state government, contrary to section 390 (4) (f) of the criminal code law, laws of Ogun State.


The former governor was also accused of corruptly obtaining property contrary to section 10 of the Corrupt Practices and Other Related offcences Act, No. 5 of 2000, alleging that on the 9th of March, 2005, the former governor did obtain the sum of N7.4m from Aron Nigeria limited for the benefit of Blue Chapel limited (a company incorporated and owned by him and the wife).

At the hearing, the lead counsel to the accused, Prof Taiwo Osiptapan told the court that "we need to sit to look at the amendment thoroughly and as well digest it", adding that "if it took them (prosecuting counsel) one month to make an amendment, we also need one month to look at the document page by page to discuss it with the client."


He added that the prosecutor indicated that charges should be amended, stating that it has been done but charges and proof of evidence are in two volumes precisely 1, 063 pages.

The presiding judge, Justice Olarenwaju Mabekoje, however, adjourned further hearing to 19th of January, 2012 urging both parties to prepare for the next hearing.