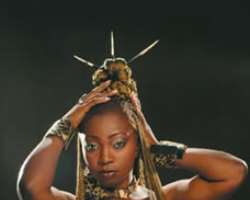 • Ara
In a country with strong tradition, Ara, the delectable drummer girl, could pass for the first woman to play the talking drum. And she's so good at it that nobody now talks about the abomination of a woman playing the talking drum, but mainly about her dexterity in handling it.

In this interview, Ara gave insight into her talking drum world and some secrets about herself. She revealed that she could sit for 10 hours making her hair without getting bored or tired. She also talked about other things.

Could you tell us how you combine singing and the talking drum performance?

Well, there's no big deal about it. When I want to sing I drop my instrument and sing. Sometimes I do just drumming and not singing. I must say that before I do find it difficult playing and singing, but now I can do both.

What feat would you say you have achieved so far?
Reactions I get from women, especially, show that I have made them know that they can do the impossible. Many women believe that only men could play the talking drum, but today it's not so. As far as I'm concern I've given them that power, strength, inner energy and strong bone to do something they never felt they could do. I believe I have created awareness among the people and as an actress of many years I've been very lucky to be scandal free. I have lived a decent life. I've been able to show to women and men alike that they don't have to be wayward. Being an artiste does not give one the licence to be wayward or promiscuous. Generally, my music has given women a voice.

Have there been any time you felt like quitting?
Yes, especially when I felt I was being used by my former manager. At that time, I realised that we were earning so much money, but little was coming into my pocket. In 2004, a contract was brought to my hotel room to sign. I was to be paid $3, 000 for playing two tracks. I queried my manager on why I should be paid such, when the hotel room I stayed in cost $3, 500 per night. I realised that it was a rip off. From then, I never trusted them, but we tried to reach a compromise. My name was all over the world but little was coming into my pocket. Some people were making money out of me. However, the brand was opening doors for me.

How do you see marriage life?
As a child, I loved children. I knew my child's name years before I conceived him. Then I used to pray and bless his destiny. I told God that I needed a boy. The day I knew I was pregnant, from that day, he became my prayer partner, right in the womb. I had him by cesareans section. When they gave him to me, I removed every cloth he was wearing, and mine and first prayed for him, by giving him back to God, who gave him to me, because I cannot care for him myself without God. After that, I placed him my chest for us to bound. I held his hand and prayed with him for one hour, because he had been my prayer partner. I broke down because for me to carry my child was a miracle.

Unfortunately, my marriage crashed in January not because I was a bad mother or wife but I was married to the wrong person. We had different beliefs. I now tell women not to believe that the man will change after marriage. If a man doesn't change before marriage he will never change. Don't believe that marriage will solve the problem or that marriage changes people. It doesn't change people. Well, I don't want to say much, especially since my ex-husband has political ambition. Speaking on it could destroy his political ambition.

It seems you still love him?
Well, it's not love but respect. I don't love him anymore. I did love him with all my heart. I respect him because of my son. I believe that no matter what happens he's still the father of my son. There were good moments with him. My son's future must be protected. I will never tarnish his image, but for ladies, mothers to learn and to avoid the mistake I made, I will definitely speak up later.

Are you going to get married again?
I will get married again because I'm a very romantic person. I believe so much in love. Most people ask me the last person I slept with and I said my ex-husband. Some wonder how I cope. I never left my marriage because I cheated on my husband. I have never had sex with any man since I left him. I have asked God to kill my sexual desires until the right man comes and he must wait until we are married before we can have sex.

Would you approve of actress acting nude?
I don't support this. A woman's nudity is her husband's pride. Our culture is different from American's. Any lady that acts nude would be marked. The whites see it as nothing because they celebrate their nudity in the sunlight, but here it's not like that. What do we have to celebrate about nudity?

What's your fashion sense?
I wear what I'm comfortable in, as long as it fits. I don't go out of my way to get any fashion accessories or go for a particular style.

What are the things you don't do since you came to stardom?

I still eat rice at 'mama put' in Surulere. I still eat roasted plantain by the roadside. I still eat toasted yam with Pomo. I love it. I eat roasted corn. I love Nkwobi. When I was still married, my cock never prepared my husband's food. I did the cooking myself. I even love going to the market myself to get what I needed. In the market, people recognise me because of the way I do my hair.

What stands you out?
My hair stands me out.
Why do you prefer this long hair?
As a child growing up, I loved Indian movies. I fell in love with the Indians.

How many hours does it take you to make this hair?
I sit down for 10 hours to make the hair and it's done by six boys. I carry it for six months or four months, depending on how it is done or how far away I am from home.

What advice do you have for parents on the life of girl child?

Our society is such that if a girl is raped she is blamed; she cannot speak about it; rather she would be seen as having brought shame to the family. Mothers should know that we should not sweep this under the carpet. A lot of men rape their wives; uncles rape their nieces; neighbours rape girls. In the end, the victim is subjected to shame. Some people find it difficult to open up. Therefore, women have to come together and support each other on this. There was this case of a little girl of five who was sleeping outside due to heat inside the room. A neighbour took her into the bush under duress and raped her. She was recently taken to Egypt for surgery. What I heard was that the man in questions has been released. We need to protect our daughters. Let them know their right. We need the government to help us as well.

What would you tell your fans?
I want them to remember me as a great musician who makes people happy using my brand of music.