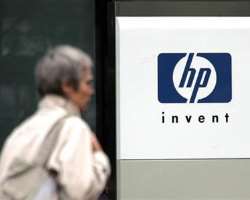 Hewlett-Packard Co will ramp up spending on research, sales and turning around its flagging services arm in 2012, after its fourth-quarter profit fell nearly 91 percent on weak computer sales.

The world's largest technology company by sales also gave a modest earnings forecast for fiscal 2012, setting a low bar for new CEO Meg Whitman in what she called a "reset and rebuilding year."

Better-than-expected quarterly results suggested the storied Silicon Valley company was finding its feet after a tumultuous year, but executives said its turnaround effort will entail major -- and as yet unquantified -- investments in research and development and in expanding personnel and internal systems.

Whitman also warned of serious challenges to growth from a worsening external environment, including dwindling demand from Europe. Flooding in Thailand has choked off the supply of hard drives, driving up prices for the crucial components in personal computers.

The former eBay Inc CEO, who took over at HP only in September, also said a slow global economy, and Europe in particular, was another challenge along with flooding in Thailand.

"This is going to be disruptive for the industry in Q1 and Q2," she said, adding the full impact of the flooding was still unclear.

HITTING 'RESET'
The results capped a turbulent year for HP marked by strategy flip-flops, executive churn and the ouster of former CEO Leo Apotheker after less than a year in the top job.

Whitman said 2011 provided too many distractions, while an announced decision to consider a sale of the personal systems group hurt HP's business by driving off potential buyers, particularly in China.

"We need to reduce the drama here," she told analysts on a conference call, with a slight chuckle. "There was a lot of drama in 2011."

The past year saw HP consistently miss its own financial forecast, acquire British software company Autonomy for over $11 billion in a move widely panned by investors, and spook Wall Street by floating the possibility of a spin-off of the huge personal computer division.

Whitman said HP will not be making any more large acquisitions, but might still do smaller deals -- potentially in the software sector -- below $500 million.

"There may be two or three acquisitions that we want to take a look at in the software space," she said.

The company also plans to increase its research and development spending in 2012 following a 10 percent rise in the group's budget last fiscal year. It also plans to add sales personnel, particularly to manage big customers.

"I would describe the numbers as stabilization," said Michael Yoshikami, CEO of YCMNET Advisors. "This is the first quarter in a long time there has not been a drastic change or announcement.

"It's a classic case of no bad news is good news."
MODEST OUTLOOK
The company said non-GAAP net revenue in the fiscal fourth quarter inched up 1 percent to $32.3 billion. Analysts had forecast revenue of $32.05 billion on average, according to Thomson Reuters I/B/E/S. Excluding items, HP earned $1.17 a share, better than the average analyst estimate of $1.13 a share, according to Thomson Reuters I/B/E/S.

For fiscal 2012, HP is projecting earnings of at least $4 per share, excluding items. Wall Street analysts on average expect the company to earn $4.54 for the full year, according to Thomson Reuters I/B/E/S.

"They set a goal they could achieve, they wanted to put a number out there that they could hit," said Michael Holt, an analyst with Morningstar. "Meg Whitman is bringing a focus to operating the business which has been lacking."

The company's shares slid lower to around $26.40 after initially rising on the earnings report after-hours. They shed more than 4 percent in the regular session to close at $26.86 on the New York Stock Exchange.