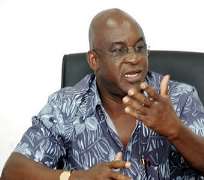 ABUJA, November 15, (THEWILL) - President of the Senate, Senator David Mark has indicated that the Senate would take action on the implementation of the judgment by the ECOWAS Court of Justice, which declared the right of Nigerian children to free, quality and compulsory basic education.

This was disclosed in a letter signed on behalf of the President of the Senate by Senator (Amb) Anthony G. Manzo, and sent to Socio-Economic Rights and Accountability Project (SERAP).

The letter with reference number NASS/S/SP/SA/PA/COMPT/03/I/169, reads in part: “His Excellency, the President of the Senate, Distinguished Senator David A.B. Mark is in receipt of your letter seeking support for the implementation of the ECOWAS right to education judgment.”

“He commends you for drawing his attention to this issue, and has accordingly referred the matter to the Senate Committee on Inter-Parliamentary Affairs for further necessary action.”

The action followed SERAP’s letter to the President of the Senate urging him to support the efforts to implement the judgment.

Replying SERAP in a letter dated 15 November 2011 and signed by its executive director Adetokunbo Mumuni thanked the Senate President: “for taking steps to ensure the full and effective implementation of the right to education judgment. We applaud your leadership and political will as the first political leader to acknowledge the judgment and to take action towards its implementation, at a time the government of President Goodluck Jonathan continues to ignore the judgment.”

“We urge you to exert the Constitutional authority of the Senate to put pressure on the government of President Jonathan to put in place mechanism to effectively enforce the judgment for the sake of more than 12 million Nigerian children of school age still roaming the streets and have no access to quality basic education,” the organization added.

It would be recalled that SERAP, International Commission of Jurists (ICJ), INTERIGHTS, Nigeria Union of Teachers (NUT), and Nigerian Guild of Editor (NGE) in June sent an open letter to President Goodluck Jonathan urging him to “use your good offices and leadership to establish a plan of action for the implement of the judgment.

The groups said: “We note that Nigeria has the resources and capacity to implement the ECOWAS Court right to education judgment if the government is able to exercise the required political will.”

The groups also launched an internet campaign urging “Nigerians and non-Nigerians to take advantage of the social media to give a voice to the campaign to ensure that the over 12 million Nigerian children of school age roaming the streets across the country are back in the classroom.”

The groups insisted that, “We believe that by the judgment, the government is required to review the effectiveness of the existing domestic legal and constitutional remedies for the enforcement of the human right to education, and to take steps to address structural or general deficiencies in national law or practice.”

The groups also noted that, “Article 15(4) of the ECOWAS Treaty makes the Judgment of the Court binding on Member States, including Nigeria. Also, Article 19(2) of the 1991 Protocol provides that the decisions of the Court shall be final and immediately enforceable.”

Following a case instituted against the Nigerian government by Femi Falana on behalf of SERAP, the ECOWAS Community Court of Justice in November 2010 delivered a ground-breaking judgment requiring the government to provide as of right, free, quality, and compulsory basic education to every Nigerian child.