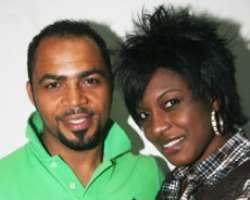 Popular Nigerian lover boy actor, Ramzey Nouah, and upcoming Nollywood screen goddess, Chika Ike Gbireri, together with some other Ghanaians are involved in a “forbidden” act in Ghana. The two Nigerian stars are currently shooting a movie titled “The Forbidden” which is been produced by 7th Act Production in Ghana.

This was disclosed to peacefmonline when the press paid them a surprise visit over the weekend, at the plush Royal Richester Hotel, East Legon, where they are presently lodging for the production.

In his interaction with the media Ramzey expressed delight and the warm welcome given him so far by Ghanaians.

“I enjoy sleeping and Ghanaian tilapia. I bet I have added a couple of pounds to my weight since I came to Ghana. I am really enjoying my stay in Ghana,” he said.

Chika, in a calm and shy mood said, “this is my first Ghanaian production and I'm so excited. I love Ghana”.

Ramzey and Chika are playing the lead role in the movie as husband and wife.
Multi talented award winner, Ramzey Nouah, who is married with three children, maintained that since both of them (Ramzey and Chika) are married; “playing in a movie as married couples has been a good experience.”

Ghanaian actress, Lucky Lawson, who is the writer and producer of the movie, said she had Ramzey in mind when she was writing the script. Lucky stressed that she believes in giving young and up and coming movies stars the opportunity to shine and since Chika is one of the new faces in Nollywood she decided to pair her with Ramzey.

She reckons that the movie, when released will be one of the best ever produced in the Ghana, and its impact, will be felt beyond the shores of the country's borders.

“The Forbidden” is directed by a Sierra Leonean film Director, Jimmy B, who is also a musician. According to Jimmy, more than 80% of the movie had already been shot. Jimmy who also featured in Eddy Murphy's “Coming To America” as an actor added that the script and the screen play is very challenging.

Chika Ike Gbirerim, two time nominee for Best Up Coming Actress by the Africa Movie Academy Awards (AMAA), who got married a few months ago, said she always play roles which portrays women positively but in “The Forbidden”, which is being shot entirely in Ghana, she is playing a whole new role as a naughty married woman.

Ramzey first acted in “The Web” produced in Ghana by Nigerian actor Zack Oji, and “Lover Boy in Ghana”, produced by Venus Films.

Aside Chika and Ramzey, “The Forbidden”, stars some renowned Ghanaian movie actresses such as Stacy of “Music Music” fame, Lucky Lawson (producer and screenwriter), Martha Ankomah, and other familiar faces.

“The Forbidden” is expected to be released before the end of this year.