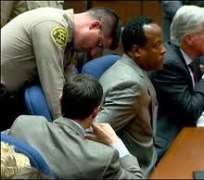 • Conrad is remanded in custody
Dr. Conrad Murray, found guilty Monday of causing Michael Jackson's death, begins his new life as an inmate in a section of the Los Angeles County jail where high-profile prisoners are kept, a jail official said.

While it is the 'medical area' that houses inmates on suicide watch, Murray is only there because it has a higher ratio of guards, Los Angeles County Sheriff's Sgt. Harry Drucker said. Murray's defense team has vowed to appeal his involuntary manslaughter conviction, but first they must deal with his sentencing set for November 29.

While Murray was 'devastated' by the guilty verdict, he is 'confident' he will win an appeal, defense lawyer Nareg Gourjian said. 'What matters most right now is trying to keep Dr. Murray from taking up a prison cell in this community,' lead defense lawyer Ed Chernoff said. 'That's what we're focusing on right now and we'll deal with an appeal after that.'

The main criteria in deciding whether to revoke, suspend or take other action against any doctor is assessing how substantial a crime is related to the practice of medicine. There is no timeline as to when the board might act regarding Murray, said Simoes.

Murray served as Jackson's personal physician as Jackson prepared for his comeback concerts, with Murray giving him the surgical anesthetic propofol to help him sleep nearly every night for the last two months of his life, according to testimony.

Murray could be sentenced to as much as four years in a state prison, but his lawyers will ask for probation and 'maybe a little bit' of time in the county jail, Gourjian said.

If Murray's conviction is treated as a non-violent felony he could be kept in the county jail, where he could be eligible to serve some of his time at home under monitored house arrest. Los Angeles County Superior Court Judge Michael Pastor, who will decide Murray.

's sentence, made it clear when he denied bail Monday that he considered the doctor a threat to public safety.

'This is not a crime involving a mistake of judgment,' Pastor said. 'This was a crime where the end result was the death of a human being.' Both Chernoff and Gourjian said the defense was not surprised by the guilty verdict.

'I think what went wrong was a lot of the pretrial rulings that were made by the court in reference to some of the evidence that we planned to offer for the jury to consider,' Gourjian told CNN's Piers Morgan. 'I think that's essentially what denied Dr. Murray a fair trial in this case.'

The outcome may have been different had the defense been able to introduce additional evidence like on Jackson's past drug use and 'financial condition,' Gourjian said. Pastor's rulings to limit the defense case could be the basis for an appeal, he said.

Murray appeared to show no emotion as the verdict was read by court clerk Sammi Benson Monday afternoon or even as deputies handcuffed him and led him away. A loud celebration erupted among Jackson fans outside of the courthouse, where emotions ran so high at least one woman fainted. Passing cars honked their horns, as people nearby hugged, cried and yelled out in joy.