One Killed In Liberia Pre-Election Clash 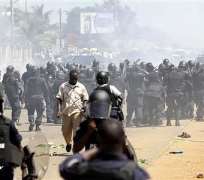 Members of Tubman's CDC party said at least three other people were killed, though this could not be confirmed. Two United Nations helicopters flew overhead as police and Tubman's rock-throwing supporters clashed in side streets.

Liberian police firing tear gas and live rounds later stormed the CDC headquarters before they were repelled by U.N. peacekeepers, who have set up a cordon around the building.

Tension has risen in the Liberian capital ahead of a November 8 election run-off between Tubman and President Ellen Johnson-Sirleaf after Tubman called on his supporters to boycott the vote over alleged irregularities, despite international pressure on him to stand.

Violence erupted after police tried to break up a crowd of several hundred CDC supporters. Shooting then broke out and a police officer said both the police and Tubman's supporters had fired, but it was not possible to confirm the information.

A Reuters reporter saw a dead body with an apparent bullet wound to the head at Tubman's CDC party headquarters. Several people were injured, including two police officers.

"I have never in my life seen the police treat civilians like the enemy. The Nobel peace laureate is killing us," Washington said, referring to Johnson-Sirleaf, who was recently co-awarded the Nobel Peace Prize.

A U.N. vehicle had its windows smashed, slightly injuring two peacekeepers, according to a U.N. official. An official at Liberia's ministry of information said the government was holding a security meeting and could not immediately comment.

Johnson-Sirleaf took nearly 44 percent of the first round vote on October 11 and has since won the backing of the third-place finisher, former warlord Prince Johnson, all but sealing her victory in the second round run-off.

Former U.N. diplomat Winston Tubman - who took roughly 33 percent in the first round - announced last week he would withdraw from Tuesday's race and called on Liberians to boycott the poll due to evidence of fraud.

But international election observers called the October 11 vote mostly free and fair, and the United States, regional bloc ECOWAS and the African Union have all criticized Tubman's decision to boycott the second round.

The vote is due to gauge the West African state's progress since a devastating civil war ended in 2003 and pave the way for new investment, but fears are rising it could instead open the door to open-ended political turmoil.

Retreating CDC supporters set up barricades of burning tyres and tree stumps as they were pushed back by riot police.

Tubman told Reuters on Sunday he was seeking changes to Liberia's vote-counting procedures and a delay to the run-off of between two and four weeks, adding that his party would reject the results if the election goes ahead on Tuesday as planned.

"I think that at the end of the day we will have to evaluate what is likely to be better for the country: delaying the elections or going forward with them in a way that doesn't carry the support of such a big party in the country," Tubman said.

"The impact on the region would be huge if we were to descend into chaos again." He said he had urged his supporters not to be violent on polling day.

U.N. "DEEPLY CONCERNED"
The United Nations Security Council said on Sunday it was "deeply concerned" by the boycott announcement, and added that it had received reports that members of Liberia's national electoral body had received threats. It gave no details.

Johnson-Sirleaf, who campaigned to cheering crowds in the capital on Sunday, called the boycott unconstitutional.

Liberia is one of the world's least developed countries with over half of its people surviving on less than U.S. 50 cents a day. Fourteen years of on-and-off fighting that ended in 2003 killed nearly a quarter of a million people and left its infrastructure in ruins.

Johnson-Sirleaf became Africa's first freely elected female head of state in 2005, and has been internationally praised for reducing the country's debt and maintaining peace. But she faces criticism within for the slow pace of development.

Analysts had anticipated that a smooth election would trigger a surge in foreign investment in resources like iron ore and oil, which have already attracted major firms like ArcelorMittal, BHP Billiton and Anadarko Petroleum.

"A ... boycott would indeed undermine the credibility of the election in that the elections would not reflect the views of all voters," said Lydie Boka, head of risk consultancy StrategiCo. "It would also open the door to endless claims and accusations that the regime is not democratic."

Many, like Rachael Dennis, a mother of four who works at a market stall, merely yearn for peace.

"Those who say they will not vote, it is their right to say so. For those who will go to vote too, it is their right. All that I am saying is there should be no hala-hala," she said, using the local term for violence.