CBN SHOULD ENSURE CREDIT IS REVITALIZED IN THE SYSTEM-EZEKWESILI 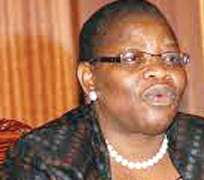 What is your impression on the banking sector reforms and mergers and acquisition taking place in the country?

These are the early days we have to keep a focus on both monetary and fiscal policies. The monetary authority has to keep focus on improving the performance of the banking sector. The most important thing is to ensure that credit is revitalized in the system to reactivate the real sector, because that is where the job creation has to come from.

Some of the measures that are being taken is on course but the high cost of doing business by the Small Medium Scale Enterprises (SMEs) is not just from the lending aspect but from other transaction costs, such as transport, energy, etc. So by the time you reduce all the transaction costs then there will be a balance when you consider the cost of borrowing.

What is your view on the recent hike in Monetary Policy Rate (MPR) by the Central Bank of Nigeria (CBN)?

Well the CBN is trying to address the problem of inflation. Inflation is the worst disaster you can invite on the poor. The rich can handle inflation because their affluence can accommodate all the problem of inflation but the poor cannot because all the baskets of their income go into food. So with inflation, it is going to make the vulnerable even worse off.When you have inflationary trend it is going to bring about uncertainty and turn off f investment and that is why what the CBN is doing is laudable.

In economic management there is always a trade off. So if the CBN increases MPR it will make the cost of borrowing higher and at the same time reduce money supply, so all these thing will bring a mixed balance on the economy. Also, the activity of the finance ministry must be complementary with the CBN in order to tackle inflation. The monetary authority must find a way of mopping excess money supply in the country.

Inflation is one of the primary responsibilities of any CBN to handle, so it is a difficult thing but if you want to control inflation and at the same time attract investment, there must be a tradeoff and there is seldom anything one can do.

Considering the recent rating on Nigeria by Fitch, what is your view?

When you move from negative to stable rating it means you are beginning to make a little bit of progress though not enough because many other countries are competing and trying to have triple A and positive rating, The business environment determines reasonably the level of confidence that both domestic and foreign investors would have in an economy and they look at this kind of ranking when making investment decisions.

So Nigeria needs to work hard and put more effort in ensuring that it meets all the indicators of these kind of ratings like, triple A, currency international ranking, confidence ranking, ranking in doing business and every other ranking because each business environment determine how much investment ultimately will come into an economy.

Considering a good rating and the infrastructure deficiency in Nigeria, how would it attract investment?

They will not come into a country that has a key bottleneck and in an environment with many hurdles in doing business. And so government has to focus on things that will improve business climate, some of those things is the bulk bureaucratic reforms that you have to do , but the most important is having a macro economic stability that will ensure that your fiscal activity are well ordered, prudential and your monetary policy are such that check inflation, guaranty stability and prohibit exchange rate volatility so that such stability will make investors take you serious when making investment decision. So in order to address the infrastructure deficit the role of government and private sector will come complementary.

In terms of additional financing in an annual basis that is needed, at least more than $25 billion that we need to address infrastructure; you can find private sector and government sharing the risk that is involved in it.

What do you think government can do to tackle fiscal problems in the economy?

There is urgent need to reduce the portion of the recurrent expenditure of the government, it is really urgent for government to do so because no economy can develop its infrastructure with the kind of budget we have. It does not create the basis of economic growth.

The bridal of economic growth is the investment in infrastructure and human capital for an overall economic growth. The part of fiscal consolidation really must be considered. The government must live within its means and it should not crowd out the private sector by borrowing from the domestic market where resources are available for the development of the real sector that has potentials for employment.

What is your view on removal of subsidy by the Federal Government?

You need to focus on supply side. The supply structure of fuel needs urgent attention of the government. First of all, in tackling the issue of fuel in the country, the government should be able to address the supply of fuel. That is all I can say on this at the moment.