WHY TENURE EXTENSION MAY NO LONGER STAND 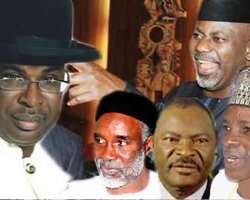 So now, once again we stand on edge thanks to this 1999constitution and the possibilities it can bring. When a constitution does not stand in the natural law, it opens itself and the citizens to uneasy moments as we expect with the recent appeal by INEC against an earlier rulling by the Supreme Court last year extending the tenure of 5 Governors of the PDP thereby denying their States of the hassles of holding an election with others. At that, time it was convenient for the ruling party to support the process if only to avoid a likely constitutional crises that would likely have truncated the 2011 elections.


As you must understand all parties are into this with both eyes open. In Nigeria, justice is not asleep but dead even though each man has a right to prop it upright in order to obtain some of its sleepy words of endorsement to enable each sponsor-overcome exigencies of the moment. So it is with the constitution we run which had negated all efforts at proper Amendment to some wholistic state till date.Recall that just before the Supreme Court Judgement in 2011, I wrote:”How to save Nigeria from Constitutional Anarchy”. In this article, I argued that extension of tenure for the five governors was expedient not because it was just but because the constitution allowed such injustice and the political class had resigned to the shortcomings of the political environment in Nigeria. However, this expediency existed only then since it allowed us to get over a bad patch. Little did I realise that we could begin the incoming government to this time without tidying up the constitution but allowed the constitution unchanged to take us to another constitutional brink.


Now it will be a surprise if the same Supreme Court does not reverse the five Governors tenure extension. The same arguments that brought it about is being put forward to disallow it because this really as you know this constitution can hardly have one definition of justice.In the same way the Supreme Court will likely move to reverse itself. Already the only group that presented an arguement in favour of extension which shocked our elite lawyers like Femi Falana,the PDP has changed its outlook about things and may again be the group bold enough to encourage the court to do the ‘right thing’. The said tenure extension for five NigerianState governors hinged on the fact that tenure starts to count from the day they took their oath of office. Moreover, the duration would be 4 years. Therefore, if your election was annuled you could get your tenure extended since you take a fresh oat of office. Without having to think deaply about it this is okay, especially knowing that nothing really need make sense in this constitution. However, when you think about it more deeply you might laugh at your own naivity. How could wer have been so shallow and blinded by our bushy own eyebrows? What exactly is the swearing in or Oath taking based on? Just some questions to tune up our minds in this way. Suppose for reasons we have no control over the winner is not able to take the oath for a long while? What It shows is that swearing in cannot be taken in isolation to the entire national goal for it cannot stand alone. It is understandable that we have rendered the constitution purposeless through ouster clauses decreed by the military, drafted by lawyers, and rubbed into the new constitution through ‘no go areas’by mediocre political opportunists and military politicians in the years ahead. So there is really nothing to bring us back to sane reflection what we do is follow precedents whether aligned or not. Again with military agents breathing down the back of public servants whom they can blackmail with security scares at crucial moments,it is understandable that no one needs do any deep enough thinking of anything.


The above became our national Dilema when learned men stand aloof while political parties push their arguments through the courtv system that depends on evidence available, admissable, servable and received. Therefore, it was when the Justices ruled that taking the oath of office twice was acceptable and that one oath was nulifiable.The question is if the first oath is nulified by the second how did the second oath arise. Could the second oath stand on its own leg without the first oath? Definitely, they are related and all intertwined by the National goal, which ideally in a good Constitution should form one whole and emanate from the opening entries of a constitution –the foundamental principles of State action. Unfortunately, for us this entry does not agree with the state action itself because so many petty entries make a mokery of its very existence in the same constitution. So you can understand why the justices did niot labour to go back to get a unity or harmonise their judgement in the rush for expediency. Make no mistake it was the only way out at that time but now we have the luxury to do it right to avoid becoming a laughing stock in the comity of nations.


Tenure of 4 years for Governors is not likely to exist in isolation of the big picture; even if such a picture meanwhile has been distorted. I miss the Late Gani Fawehnmi. Our lawyers may need to be financially independent to be able to withstand the lure of money as Gani did. The kind of money that is rumoured to change hands does not really encourage deep thinking. Let me say it again, What the Nigerian constitution deserves is not amendment but allignment to good sense. That good sense existed in the 1960 constitution. We do not have any choice over this matter but when you have taken the wrong steps, you retrace them. You do not go faward ibn your wrong direction. I expect our experts to understand that the first step physical and spirtitual is to reverse what happened in 1966. To remove those ouster clauses that distorted our constitution by attempting to build a nation outside the approved plan without even bothering to make a new foundation but naively continuing ineffectually on the old.


It is not just enough for General Gowon to appologise for his mistakes in governance as a military ruler who had to help rub in Gen. Ironsi’s ouster clauses. Gowon engaged even further even while the military claimed it was disengaging; but I expect him as a political scientist who in the meantimeb via higher education has come to understand the untearable threads knotted by these actions to lead a crusade to make amends constitutionally. In the same manner as he put foward his “Nigeria Prays”, Gen. Gowon can actually help convince his fellow military retired Generals why Nigeria should conciuosly remove these ouster clauses. Why this action will help Nigeria continue the truncated upbuilding on the approved plan of the 1960 constitution.I expect the Supreme Court Justices to understand the vital nature of their role in helping to reastablish a national direction by aligning their compass with the approved national purpose of nation building as enshrined in the 1960 constitution.


Tenure extension, which has nothing to do with stargering of elections, stands out as if a sore thumb .The idea that your tenure begins when you took the oath of office for the second time should hold no water because tenure itself cannot be determined outside the constitution itself and cannot be higher than stipulated no matter the situation. Even if you change the constitutional provision, it still will not stand because the constitution remains a whole and must align with the overall national purpose depicted visually in the national flag and coat of arm and scored into music in the National anthem. What it means is that you cannot change the Constitution without changing the flag, the coat of arm and the national anthem. If you change the constitution or just put up outster clauses, you need to change the flag, the coat of arm and the national anthem to be in line with the new constitution or you risk establishing imbalance in the society you build. The more the changes you make in the constitution as in Nigeria without any commensurate change in the flag a spiritual imbalance is immediately established that is capable of turning society’s values on its head. That is the summary of the Nigerian dilema. May the reversal of the Governors tenure extension lead us into deeper thinking and resolution to correct the deep spirtitual, mental and physical burden we have imposed on Nigeria out of ignorance in the past 51 years!


Written by Nwokedi Nworisara aspired to be President of Nigeria in 1992.